Late last night, Chloe was sleeping while standing - in pain. So I slept on the sofa, in hopes she would crash on the floor next to me. She did, lying on my warmest coat. I covered her with a blanket and she didn’t move all night but I slept fitfully. Today, she’s on the mend and her little "stinger" tail is wagging.

After Michael did a few chores around the house this morning, he sat at the computer and I urged him to see my blog, particularly the Bluebird story I posted earlier in the week. He was not at all interested, which was no surprise to me. I thought, “Ok, you snooze, you lose, buster,” and I continued pushing the vacuum. The Hoover was howling and I noticed him smiling at the computer monitor. The sneak was reading through my blog and laughing. “Who named the bluebirds?” he asked. Back at him, “Who do you think named them? It was my story!” (Yes, it’s now confirmed, Michael. Your wife is a fruitcake.) Smiling, he shook his head and knew enough not to say a word. It was so nice to see him smile and enjoy something I love doing.

A few minutes later, he called out above the vacuum, “Do you want to take a ride to Southpark Mall?” Southpark Mall is very, very upscale. You go there with full make-up and wearing jewelry accessories. I had slept on the sofa all night, had not showered, and to put it plainly, I looked quite rugged and skanky. Who would finish vacuuming the whole house, be sure dinner was in the oven at 3pm for Gina and Billy tonight, top the pond, poop patrol the yard, and a dozen other things around here? Does he think I'm "Bewitched?" I don’t understand men and their thought processes, sometimes. Besides, I wanted a little time to look for bewds. Minutes later, the phone rang with a golf invitation for him. You Go, Michael! I was saved by the bell! The feeder was buzzing today but I couldn’t get near them. Still no takers for the suet. Not a good bewd day. I wanted that Titmouse! 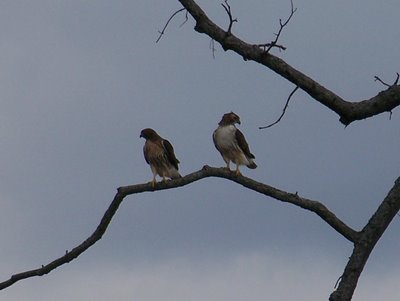 On my short trip to the grocery store I hastily pulled into an empty parking lot. I was allowed only one shot of the hawks before they fled. They might be red-tailed but I'm not sure. Click to enlarge the photos. 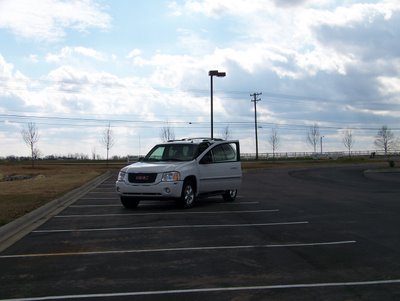 Turned back to the car. How could I have done something so stupid? The keys were in the ignition with the engine running. Who needs to report a stolen car on a Sunday afternoon? I’d better be more careful. 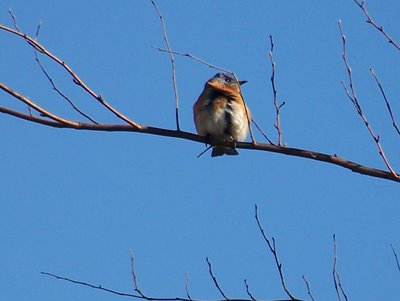 If you love bluebirds, come visit me. See the strong wind ruffling his belly? I see more and more of them each day at my house. 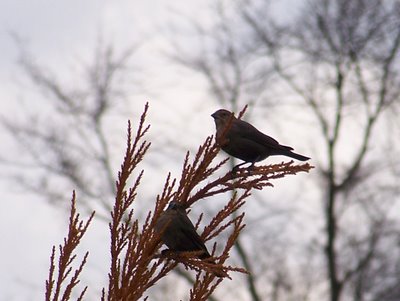 This Cowbird pair is cute. The wind was horrible today and they hung on tightly atop this flimsy evergreen and waited for me to get back inside the house. This isn't a good photo of them, but I like it. 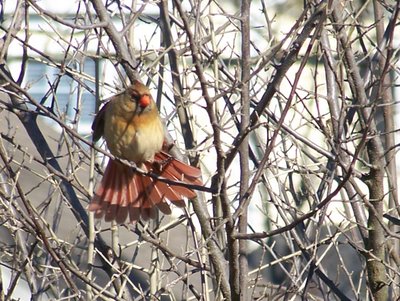 Male Cardinals are striking in color but there is something about the female that is so exquisite. 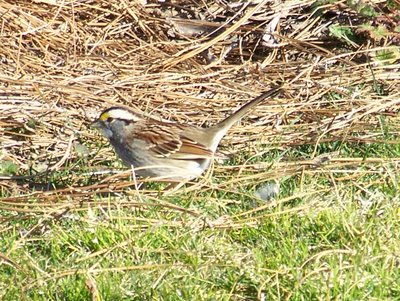 Several white throated sparrows allowed me to get closer than ever. 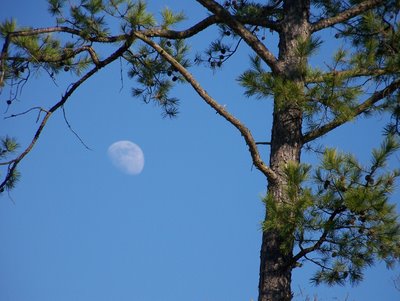 Oooh Mary- your pictures today are awesome!! The hawks are cool (red-tails?) Wonder if they're a maiting pair sitting so close together? I'v only seen a few bluebirds, and never near my yard. You captures a really special pic of the cardinal. I love catching them in motion like that! I agree, I think the females are very beautiful- muted. I only ever see white throated sparrows in spring and fall when they move through. Your last shot of the moon in the blue sky withe the craggy pine is just lovely. It would make sucha a nice card!

I'm glad to hear Chloe's tail is wagging today! I'm glad your hubby loved your blog.
I love your bewd photos!! I especially love female cardinals, too! I love her tail spread out like that. Oh, you're so fortunate to see & photograph bluebirds and hawks! Maybe someday I will, too. Love your moon shot, and I'm glad your vehicle was still there when you turned around to go!

I took the same picture of the moon here in Canada. Funny the things we share even when we live so far away. We might share the moon, but you have all the birds!

I was going to comment on how close the red-tails are sitting together, but Lynne beat me to it. Love is in the air!

Now. On to the husband issue. You'd think they'd be interested in reading our most private thoughts that we share with the whole wide world, right?

No go here either. If my husband does it, he must be really, really quite about it.

Glad you escaped the mall.

WOW, such a wonderful birding day you had with many great birds! looks like you had a wonderful day!

I love the photo of the female cardinal--it looks like she has on a lovely pale red skirt, all flared out.
Hope poor Chloe is feeling better--she did look miserable in the photo in your earlier post.

I love the pictures and the moon picture really is WOW! I have been on a moon kick lately too.

By the way, I'm sure glad I'm not the only one that jumps out of the car, leaves the keys in and door wide open to take photos.

The scoop on red-taileds:
Buteo jamaicensis
Order: Falconiformes
Family: Accipitridae
They are monogamous, breeding with the same mate for years, and will only find a new mate if their old mate dies.
The pair you photographed may be hooking up, though it's early They start nesting in the spring.
There is a wide variety in colors of their plumage. As you can see from your photo, one is much lighter than the other. It can be tricky to ID them if you can't see their tails.
(Everyone seems to be confused this year...I watched two Cooper's hawks in courtship display in our yard. )
You can tell the age of red-taileds by the color of their eyes, and their tails. Juveniles have lighter eyes, and they don't get their full red tails until their second year.
Okay, you didn't ask for all this info, but I can't help it. I'm an educator.

Mary, your photos just keep getting better and better! The hawks are awesome. No husband reader here either. He seems to think it's my "private domain"....lolol. Yeah baby, real private it is when it's available to the entire net.

Mary, your pictures are awesome. Congrats on getting your hubby to read your blog! I'm so jealous of your bluebirds I can't speak! :)

(Thankfully I just read through the comments before I clicked on the publish button as I could then edit my comments so that I didn't say exactly the same thing that Jayne did which is how it looked a moment ago! :)

I just have to throw in another comment here. My husband won't read my blog either! Why IS that?

Lynne, what started out as a day without anything to talk about changed on my way to the grocery store. Thanks. Why won't some husbands real blogs? It's a mystery to me!

Pam, if I had turned around to see my car speeding off the lot, there's no telling what I'd do...that's a horrible thought!

Ruth, you have the birds...wait until spring!

Mon@rch, that's a compliment - coming from you :)

kgmom, I love the female cardinals, too. We have oodles of them around here.

Laurie, I've done that before, only I turned the ignition off and locked the doors, but those hawks were getting ready to go!

Susan, keep educating us! I appreciate your knowledge and your time.

Jayne, it's fun on the weekends to have a few hours to spare outdoors. Weekdays are more challenging.

Liza, thanks for the compliment. I've seen such top-notch photos on everyone's blog! I'm learning it takes patience, a little skill, and a lot of luck.