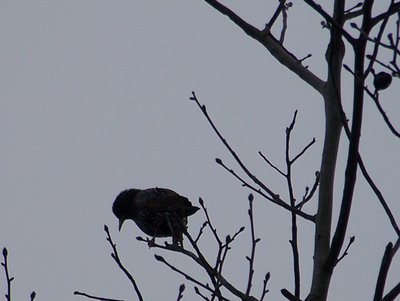 Before I start writing about my thoughts tonight, here is a photo I took yesterday under the clouds later in the evening. This bird perched at the highest point of the tallest tree a few doors away from me, with a companion below out of my focus. I hiked up the hill with the camera ready but the lighting produced only a silhouette. I thought the ID might be easy with the pointed beak and round body with short tail. The size of this bird was a bit smaller than a hawk but larger than a crow when observing the wing span during take-off. It perched for at least an hour there and did the same thing tonight. Help?

The tossed salad I took to work for lunch today didn’t excite me much. It was elaborate but not good enough. Although I was hungry enough to devour the whole salad, I picked at it and wished I had brought more of my home-made dressing which isn’t bad considering it’s mostly made with red wine vinegar, garlic, canola oil, and a pinch of Splenda. Two months ago, just before Thanksgiving, Gina and I went to our first Weight Watcher’s meeting. For four weeks, we weighed in religiously. Since then we fell off the wagon but not in a big way. I’m still holding on to the edge of that wagon with my fingertips and saying no to most of the things I like to eat. Or, at least, I’m pleasing myself with two pretzels instead of thirty, one Hershey’s dark instead of ten, one little slice of cheese instead of a block, and the lists goes on. Both of us want to go back soon but only when we are ready to give it 100%. We’re getting there. Who wants to go get weighed in, lay $12.00 on the counter before you find out that you lost .5 lbs.? Or gained 3? Not ME! Add the cost of attending the meeting, lunch afterwards, and a pair of new shoes for the daughter. We had better be wholeheartedly serious about it! I almost weighed myself after I stepped out of the shower this morning but made a quick decision. No, my hair is wet. That’s added weight. Maybe tomorrow. 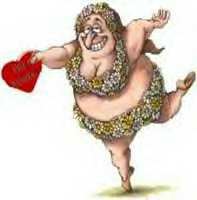 The thought of swimsuits is weighing heavily on my mind - the dreaded and feared “trying one on” under those fluorescent lights in the dressing room where every dimple and roll I have is magnified, not to mention the blinding white color of my skin - it all scares me. Ecckk. It’s like a horror movie. I wonder if security cameras in dressing rooms are real and what kind of person might be watching with a sadistic smirk on his/her face?

My neighbor, Maureen, loves to go to the pool in our community. I baked at the poolside and beach for twelve years in a row and don’t care for the sun anymore. She’s invited me to go with her many times but I always made an excuse to back out so I wouldn’t need to put a swimsuit on. Stand me next to Maureen and you’ll see why. I’m short all over with a chubby upper body and skinny legs. Maureen is five years younger than me, eight inches taller than me, and has legs like Stacy Keibler of Dancing with the Stars fame. She’s a former dancer and she wears short-shorts to show off those tan, long legs! Not baggy, elastic-wasted ones like mine that drape half-way down my thighs. Hey, if I had legs like hers, I’d wear them, too. I really want to wear a swimsuit this summer and continue using my self-tanning cream from a tube or bottle. I really do. That’s why tonight, not one pretzel will touch my lips. I want to sit next to Maureen at the pool this summer without wrapping myself in an oversized towel. 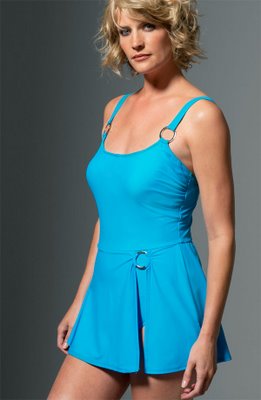 His band is playing at our pool cabana. He’s singing “The Deal”. The saxophone is sooo sexy. I’m sitting next to Maureen wearing my new hot swimsuit and slurping Bourbon slushes while admiring my new pedicure. In the early evening, there’s a warm breeze slightly moving my blonde wisps. It’s real hot so I get up from my chair and sashay to the pool, in the rhythm with his music, then sashay back after being very careful not to get my hair wet. I can’t keep my eyes off him while he sings to the toe-tapping crowd. Will I at least make eye contact with him?

My little daydream reminds me of the movie, Griswold’s Las Vegas Vacation when Wayne Newton, singing “Loving You” by Minnie Riperton, put a spell on Ellen, Clark’s wife. Out of her mind with pleasure, she stands against Wayne on stage and belts out the highest soprano note in the song, beautifully. (I can’t stand Wayne Newton.)

When you are a pre-teen or teenager, it’s normal to fantasize about your heartthrobs, i.e. Davy Jones, Paul McCartney, Ringo Starr, or Elvis. Should forty years make a difference? Huh? Heck, no! Maybe I should rename my blog: Marys-SillyView.blogspot.com. I really amuse myself sometimes :)

ROFL! Mary - you are a hoot!!! I love the fat woman cartoon!
Yeah, I've always wondered about those security cameras and what pervert is watching while I'm trying on duds.
Okay, so what's the real daydream you have about Taylor Hicks - hee hee! ;) I say if you stop dreaming then you might as well be taking a six foot dirt nap!

We're absolutely entitled to our fantasies, and I sure have mine!

But Mary, there was something about the way you told your story which sent me for my copy of Robert Heinlein's "Stranger in a Strange Land". I wanted to find a line referring to the Rodin sculpture sometimes called 'Old Woman'.
"[Rodin] can make you feel the quiet, endless tragedy that there was never a girl born who ever grew older than eighteen in her heart... no matter what the merciless hours have done to her."

It's more than 30 years since I first read that line, and even then, I believed it would be true.

[who is sometimes still eighteen]

You are too funny! I'm looking to sign up with weight watchers tomorrow- online I think. I need to do something!!! I have a HUGE case of inertia. It has always been hard for me to START something, make a change. I'll be 50 in September and I feel desparate to slim down. Maybe we can e-coach each other! :)

No clue about the bird. It's a dark one? That's all I got.

I never try on swim suits. I just buy, and hope for the best.

Next time you are in a fitting room, jut lift "the girls", jiggle them around, and give the pervs a show.

I love the bird photo. And no matter what size or shape you are...we love you!

Most of my patients are 80 year olds, but we had one younger man of 50 admitted to the ward and he stayed 3 months. You should have seen the old ladies go for him! It was hilarious. One of them couldn't stop talking about her crush on him. It showed me that we are never too old to fantasize and inside every aging body is a cool young chick ready to jump out.
Most of us are not as honest as you, Mary.

I am right there with you girl. Trying on suit is still anxiety provoking to me, even now that I have the weight under control. Love that blue skirt suit. Hides a multitude of sins!!

Good Morning Mary - thanks for stopping by to say hello this morning. I just read your post and could so relate to the dressing room trauma of trying on bathing suits. Scary indeed.

I have never been a Skinny McKinley so bathing suits don't suit me and I am always and ever will be in a knock-down-drag-out battle with the bulge. Sigh!

Chani over at Thailand Gal started a new health regime this year and is doing it with the help of KP Coach. I paid them a visit and signed up too. It's free! You might want to have a look at the site.

http://www.kpcoach.org/ Change Your Life The S.M.A.R.T. Way. It is sponsored by Kaiser Permanente. No need to be a member to join. The good part in this is the interactive nature of it. Click on the link to check it out.

I will be back to visit again soon.

Pam - My daughter read my post this morning and broke into a sweat, worried that her Mom's fantasy was headed into an x-rated episode. LOL!

Annie - I am so glad to hear that I'm not the only mature woman living in her teens, sometimes :) Thanks.

Lynne - WW works! We started at a bad time of the year. We'll encourage each other, for sure!

Ruth - That's a funny story! My beautician friend used to cut hair in a nursing home and told me of the love nests and back-stabbing gossip of the jealous ones... LOL!

Jayne - If I could wear that blue suit and look like her, I'll be so happy!

Cuppa - Nice to meet you! Thanks for the link.

Hey Mary, I have that bathing suit that the fat girl in the cartoon is wearing...along with 5 others...want me to mail them to you? I guarantee that they will all be large on you and then you can feel like your long legged svelt swimming pool buddy! LOL Hang in there with the diet, you didn't gain that weight overnight so you surely won't loose it overnight either!