Looking Forward to Something 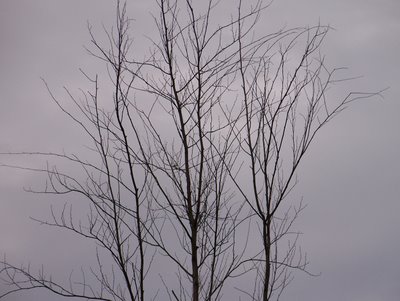 This post ranks right up there with the ten most lame I’ve ever written. For lack of a good idea for posting tonight, this is the only thing I can come up with and I apologize to readers. It’s windy, very cloudy, and the sound of the dried oak leaves rustling on the trees brings back memories of winter, finally. The temperature dropped forty degrees in less than twenty-four hours today and there's talk of snow on Thursday. I’m looking forward to one of our river birches pictured here to provide a place for all of the hummingbirds to perch before darting to the Cannas and Zinnias this spring! 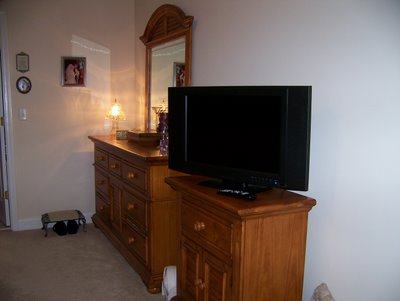 Bogged down by back-to-back meetings at the office, there was no time for me to wander outside today. I missed it very much but I do have something to look forward to tonight, though. The only television show I watch religiously is American Idol. This is my fifth season and I can’t recall missing an episode. Most days I listen to the last fifteen minutes of Oprah while starting dinner but I don’t really watch it. I zone in on other shows between laundry and various chores in the evenings but to sit and watch a TV movie or show is out of the question, even on the weekends. I’d fall asleep before the first commercial! Local TV news in the morning is something I need to have but I couldn’t tell you what the news crew looks like. I only know their voices. So, this is where I’ll be tonight for the beginning of the sixth season of the number one ranked show in America. In the bedroom, away from Michael who usually watches Modern Marvels or the History Channel…BLECH!!! 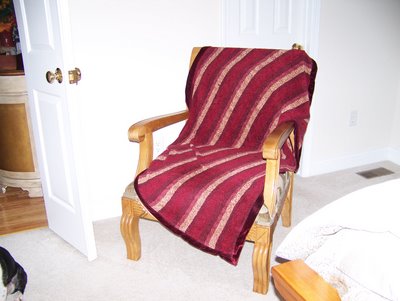 My American Idol throne. Removed of my robe and other articles of clothing, it’s ready! With a bag of “Smart Balance” popcorn that tastes worse than paper, I’m ready. This is where I'll be on AI nights until the end of the season. 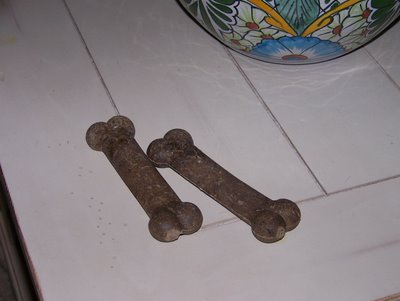 Planning ahead for tonight, I bought two fresh Nylabone edibles for the black and white girlfriends in hopes they won’t pester me with constant lap-jumping and kisses. I’m thinking of hiring a kid to keep them occupied on Tuesday nights. Not really…Michael’s in Virginia tonight so I’m the only one in the house to provide them with the entertainment they need after missing me all day. We’ve played rigorously tonight, but it’s never enough for my energetic female athletes. 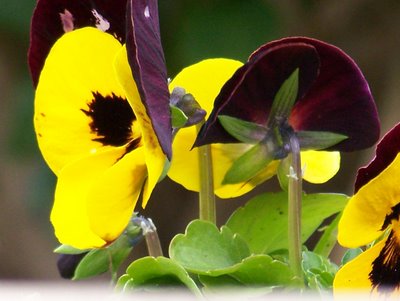 For those suffering the winter doldrums, here is a little splash of color from my front yard. Pansies peeking at you above the landscape wall.

I don't think your post is lame at all! Thank you sooooo much for the beautiful zinnias - I can't wait to see them and to smell them again! I love their happy faces.
OMG - I love your American Idol throne! It looks really comfy!
Hopefully the black and white girlfriends will keep busy with their Nylabones so you can watch the show.
Enjoy your evening!!

I enjoyed American Idol the first few seasons and then got out of the habit. I love the first couple shows with all the really bad singers - gotta give them folks credit for believing in themselves, despite their lack of talent!

My husband watches awful TV which is why I spend so much time on the computer - he likes wrestling (ACKK!) and those boring things on the History Channel or Discovery.

Thanks for the peak at the pansies - I love them - will have to check in with mine in the side garden.

Pansies...sigh...
They're forecasting teens BELOW ZERO here tonight!! What did you think of the Minnesota talent tonight? Pretty lame, huh? Do these people really believe that much in their own abilities? I did quite a bit of cackling tonight!!!

Not lame at all. I loved the photos and especially the flowers. It is so nice to see something blooming this time of year. Thank you!

I also was looking forward to AI's new season, and watched last night. I just wish they'd show more of the "you're going to Hollywood" talent and less of the silliness. They let some of those people sing for waaaaay too long when they know it's fully terrible. It's always amazing to see the reactions of those who really, truly think they "have range" and can sing. Sad really and awkward to say the least when they dissolve into tears. LOL at your description of the popcorn!!!

AI became a family moment for us during what I believe was the second season; we had just separated, and the kids and I were struggling through living in the 'fake house', as they called it, negotiating life on our own. Tuesday nights were a touchstone for us, as we huddled on the couch and watched together. I was crying half the time, confused and anxious, but we were together.

We flopped together on the bed last night and laughed and shuddered with each contestant. A new season begins! Yippee!

I liked your post, Mary. Sometimes 'normal' is exactly what we need!

Pam, AI was worth a few hee-haws last night but I get impatient and look forward to the finalists.

Laura, my husband and I have different tastes in TV viewing so I camp out at the computer in the evening, too!

Lynne, a sent you an e-mail. Minneapolis was a lot of fun but I didn't see much talent. The cowardly lion knocked me over :0) We are in the 20s today and might get a little snow tomorrow!

Laurie, yes, it was lame - the best I could do, though!

Jayne, unfortunately, we'll be seeing a lot of the same crummy auditions for the next several weeks. It's good for a laugh, though. I didn't even eat that popcorn. It's disgusting.

Beth, yeah, it was a regular day and night. You enjoy watching with your kids, too! Gina used to call me from college and we'd laugh together. She called me once last night, too! How'd ya like that Lioness?

okay- trouble coming your way with this comment. First off, turn about is fair play. I laughed and laughed at Michael and the internet connect story- sounds as though he could be the Sopranos tech guy. And speaking of koi, as you did in that post, here is a link for you: http://outsidein.typepad.com/outsidein/2005/10/a_little_night_.html

A question, Mary. "Removed of my robe and other articles of clothing, it's ready!" Do you REALLY sit there buck naked and watch American Idol? Could you get Michael to post a picture, please?

We don't watch it as a rule but we enjoy the first show or two as they are weeding out the ridiculous. But we missed it last night. :-(

Ohhhh......PANSIES! YIppy! Something growing and blooming outside. That is months and months away for me. Thanks for the pansies and hope of spring. I hope you do not get too stinking cold there.

Thanks Mary for your comment on my post about Amazing Sculptors. I also think that those works are just awesome! I would love to see them in person, too!