Striving for the Strength 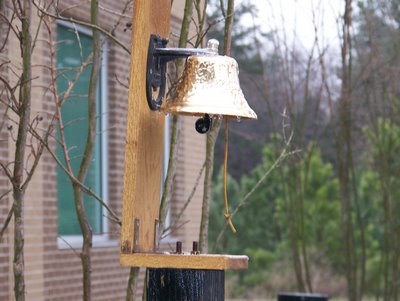 While the police cadets at my community college are in formation, they view a bell near the building. Today it was ice encrusted. It’s mounted on a four-by-four post with an inscription on each of the four sides.

Here lies a start of a new beginning.

If you can’t handle this, ring the bell.

At 7:15 a.m. it was still very dark. There would be no sunshine today as ice, rain, and snow began falling early in the morning hours. I parked my car on the lot where our police cadets do formations. They were there, lying on the parking lot, on their backs, facing the sleet, rain and snow, holding leg raises, then doing push-ups. The commandant and sergeant shouted humiliating comments to these twenty-two cadets, two of which are women, telling them how stupid they were, and branded them with suitable nicknames, i.e. “Puddles”, “Chicken”, “Cripple”, “Knucklehead”. My heart would not let me take a picture of their tortured selves this morning. This is the second week of their training and already, three have bailed out. Only those who possess inner strength and determination can handle the pressure. By the second day, I would probably have a melt down and hide inside a closet. 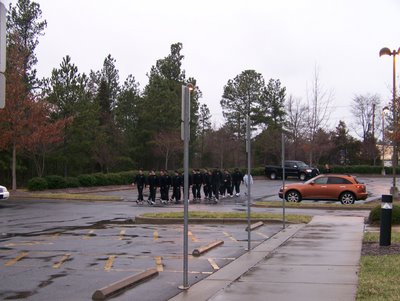 A little while later, I heard their marching voices from behind the wooded area and they emerged, learning to march, holding the left count, while raising their voices in song at the same time. There were a few who were surprisingly so uncoordinated that it looked nearly impossible for them to hold the left. 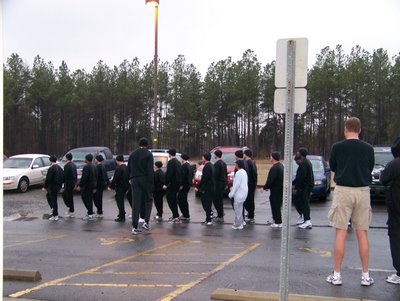 I work across the hall from Sgt. Moore, a 7 foot 2 inch tall black man, who I think is rather shy and soft spoken around the office. However, in his drill mode, he is a man made of steel. His loud voice always surprises me and today I realized that he has a very wonderful singing voice that echoes across campus! I listened for a while and was so appreciative of his talent. The commandant is wearing the shorts to prove anything is possible in below freezing weather. Whatever. The lady in the light gray sweats is our associate dean. She enjoys helping out while getting her own workout. 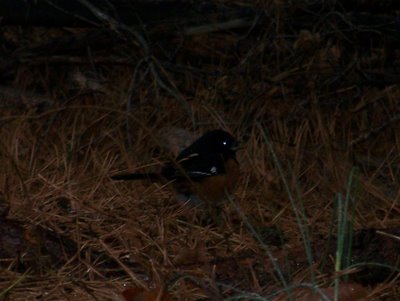 Despite the nasty weather, I pulled my hood up and broke out of the office for a while. I was in pursuit of this mystery bird for the entire time in the woods. (Click to enlarge) It was hard to photograph this bird in low light. It spent the whole time digging and nearly burying itself in the pine straw. I can't identify this bird, even after looking at my field guide. It was very black with a red underside, conicle beak. I threw some seed around and headed back inside to see my bangs nearly dripping! I'm not complaining, though. 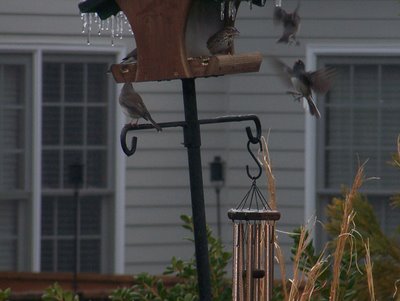 I love this photo of the juncoes scrambling for a bite at the feeder in my yard. The icicles were getting longer by the minute. I was standing on my ice covered deck and trembling. Can't afford another fall!

Wow - now that's intense training. I never did get the point of calling someone names like that. And yeah, whatever with the shorts. I went to school with a guy who would wear shorts in all kinds of weather. I don't get it. I like my fleece lined jeans in winter.
Ohh, I'm glad you braved the weather again and found another bird! Have you started using ebird yet?
Not liking the icicles - I hope you guys don't get a full blown ice-storm. Please stay safe!

Because I'm a smart-aleck, I'll give you just a musical hint to further frustrate you about your mystery bird:

That's good advice anyway for a cold and icy day, if no help with the ID.

Puzzling through bird ID is half the fun. You've noticed all the important parts of the bird Mary, you just need to put it all together.

Mostly black, rufous sides (not red like a cardinal, but rufous like a robin) a tiny bit of white on the wings, and a conical beak.

Who else has a beak that looks like that?

Start with birds you know that have similar beaks in your field guide.

All that digging around in the underbrush is a great hint, too.

I'll check back in a bit and see what you've come up with.

Good idea, Laura. Make her work for it!
Another hint: This bird used to be called something else.
I almost went into the military. I would have loved all the physical stuff, but taking a gun and shooting someone...I don't think so.
I have a great admiration for people who are willing to put themselves through grueling, unholy training to protect our country. Damn. They rock.

I do not understand humiliation and degrading treatment makes a better police officer or soldier. Police brutality and abuse of prisoners of war becomes easier if you have been treated like that in training.
Hope the freezing rain has ended!

Love your "mystery bird" and wish I could say I've had this visitor around my yard, but I've not seen one in some time! Beautiful birds they are!

That is for sure a very hard mystery bird id that you have! My first thought was Eastern Towhee but is lacking the bit of white on the belly and something with the white in the wing just doesn’t look right to me. I then started to wonder if maybe this bird is a Baltimore Oriole but the tail in the photo has a black tail but wing pattern is closer!! Hmm, very hard to tell for sure but size, ect.. might be helpful in narrowing it down more! Great Quiz!

Pam, I've haven't taken the time to use e-bird yet but it's waiting for me in my favorites. Thanks!

Laura and Susan (both of you are smart-alecks) HA HA HA! I was leaning towards the roufus-sided towhee but I did not once see a patch of white on the belly. Plus, this bird is shaped like a tennis ball. I googled it and see a good resemblence. For lack of a better photo, I'm calling it an Eastern Towhee, formally called the Roufus-Sided Towhee. (Impressive, huh) I'll head back outside later with a cuppa tea.

Ruth, the cadets are learning not to take anything personally, as they will be treated far, far worse on the streets than they are treated now. It's good to know that there are men and women learning self control and self defense at the same time. I'm proud of them, actually. The sun is shining today :)

Jayne, it seems I am seeing a lot of mystery birds lately...

Kgmom, we have a fire training academy but it's not on our campus. I'd love to watch it in action. We do all first responder training in our program. It's very interesting.

Mon@arch, thanks for the comments. I'll just need to get a better photo on a brighter day!

Now, now, Mary -- they aren't smart-alecs, they are EDUCATORS! :) I was going to give you a hint too. We have a bird here that looks just like it with a different name.

I'll let the experts decide if you got it but I'm pretty sure you did! :)

We have a lot of people here -- mostly guys who were shorts no matter what the weather is like. Rain, shine, 26 degrees or 100 degrees. It's odd.