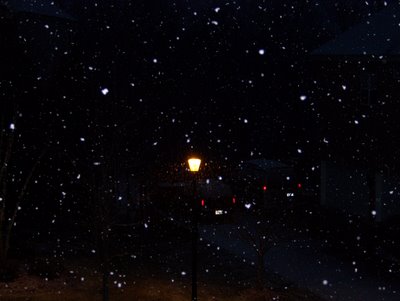 It began at 5:55 a.m. and I was ready. The morning news “snow show” began which seems quite funny to me since we were only blanketed by about two inches of the white stuff before it turned to sleet and rain. The coverage was a seven-hour TV event. Back in Baltimore, the snow show continued all day whenever there was at least six inches or a blizzard, but not for a dusting. This is the lamppost across the street and the photo turned out completely different than I thought it would. Geezzzz. 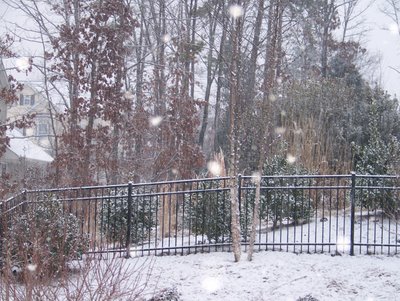 All schools and colleges closed as well as some businesses. Roads were closed due to ice and at least one hundred accidents. If Charlotte had more than ten salt trucks, we’d be in better shape. The real threat comes tonight because freezing rain is predicted and that always warrants staying indoors. Even this Yankee won’t brave the ice. Before the sleet started coming down, the view was so nice! It’s been two years since my last snowfall. 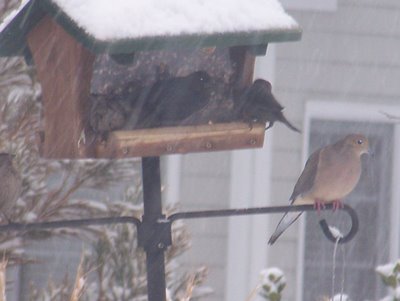 Michael left for work at his usual time and I just shook my head. He was back at 11am, though. I’m reminded of one of the several times he left for work in blizzard conditions. In January 1982, I was four months pregnant with Gina. We were having quite a snow storm that morning but he left for work anyway to make his daily commute from the Annapolis, MD area to Rosslyn, VA. This was the day the Air Florida Flight 90 crashed on the Potomac River Bridge in Washington, D.C. Four hours after he left, he stopped at a pay phone (no cell phones then) to tell me he was turning around for home, as he never made it to work. I watched the news coverage of the crash on TV and paced the floors. A few hours later, he called from a Gino’s restaurant telling me he should be home in about an hour or two. So I waited, sick with worry. Five hours later, past dark, he came through the front door and put his lunch box on the dining room table. My hormones took over and I threw that lunch box against the dining room wall where it broke into pieces. Yea, I was wild and dangerous alright. He never bothered to ask his standard question, “What’s for dinner?” He turned around and went outside to shovel the driveway. 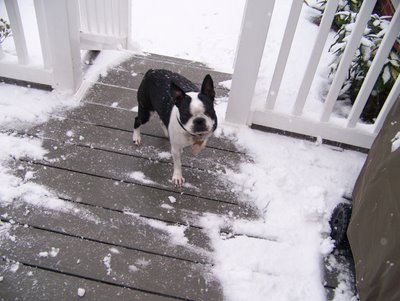 Bella obviously did not remember what snow is like and flipped out. She flew through the yard without a care and begged me to throw the hula hoop. 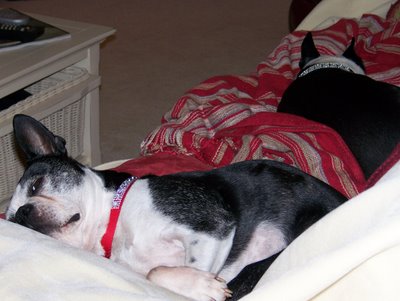 After Chloe slid off the back steps and did a little tumble, she decided stay close to the sofa today. Bless her heart. 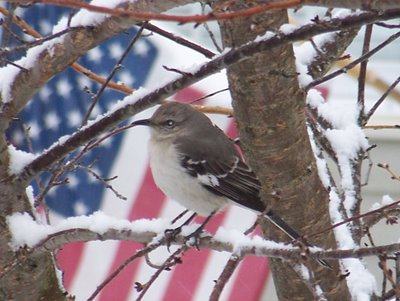 The feeder birds were sparring today. There was a lot of tension out there! A mockingbird took a break from the action and perched on a tree next to my front porch. My neighbor’s American flag background is kind of cute, I think.

So, after a few months of pining for snow, I got it, albeit short-lived. Within a few hours, it began to melt and turn sloppy and ugly. That’s when I decided I’m ready for Spring! Got my fix.

Who knew there were patriotic juncos? Enjoy your day of peace and snow/sleet.

I like the lamp-post picture. I hope Chloe is alright, she's such a cutie.

The freezing rain can be real bad, hope everyone is alright!

I guess the difference between Charlotte and Canada is the number of snow clearing and salting vehicles available. We would never get a snow day for two inches of white stuff and the threat of freezing rain. I agree, freezing rain is much riskier than snow. Hope it warms up soon so your birds are OK.

Your photos are beautiful as usual Mary! Hope you're not getting the freezing rain / ice - that's the worst!
Your babies look all nice and warm and comfy on the sofa!
I like the flag as the background for your mockingbird photo!

I think your snow is coming our way tonight, but I know we won't get the day off!

Sorry, Trixie. I first published this post with a stupid mistake and called the bird a junco. My brain is mush.

Where the HELL is my previous comment?
Sigh...Blogger.
I thought of you this morning watching CNN's report from NC.
Stay warm!

The snowfall does look pretty - but I would not wish ice on anyone.
I loved your story about your pregnant-and-hormonal response to your husband's arrival on that tragic day in 1982. I can remember being pregnant while my husband was gone and a blizzard dumped 20" of snow, so I could relate as I read that tale, Mary!

It's the same here Mary, everything just shuts down with an inch of snow. But, like you, I won't brave trying to get out in the ice. It's above freezing here today, so it's just wet thankfully. Off to work I go...

Your storm winged right past us to the east last night but I hear we may get a good shot of snow-ice this afternoon. I thought of you when the weather forecasters were saying that N.C. was going to get it...Mary got her snow hip hip hurray! Hope your couch bound snuggle bug is feeling better now that the meds are working. Like myself Chloe needs ice like a hole in her head. Mobilization is challenging enough for us older gals when all our appendages are working correctly much less when one is on the fritz!

Grrrr--so you got the snow. Our weather guys kept saying--snow is coming. Woke up this morning--nada! zilch!
As for your dogs and snow--puts me in mind of when my brother & family returned from Africa with their dog in tow--a doxie. He put one foot down in the snow for the first time in his doggie life--and said, nope. Not going out in that stuff.
Stay safe and warm today.

Great snow day! That's like when it snows here. We're totally unprepared and everything shuts down for an inch of snow. Too funny!

Hope the freezing rain doesn't cause too many problems.

I LOVE the story of the scared hormonal wife flipping out. Been there!

I love your patriotic mockingbird! Neat picture! I hope Chloe is doing better today. I saw your question about oilers in Jayne's comments. I buy mine at Mill's Fleet Farm (regional I think). It's a sort of wholesale farm and animal supply store. Their prices are great and they turn over their stock quite quickly so I don't worry about buying old, funky seed.

haha, we actually talked about horse phobias on my latest show - we hit and run on phobias.