I am OUTTA HERE!

At 7:15 a.m., I arrived at work feeling frustrated and tired due to this annoying head cold that prevents me from smelling or tasting anything - not even sugar or salt. For the next several hours, I still accomplished way too much work and kept things moving fast. Had two conference calls and used some very kind persuasive skills on some genius idiots. Tackled a wacko budget but didn't win. Almost physically abused a high tech copier that I think is way too smart for it's own good. Got hungry around 1:00 and still wasn't able to smell or taste a damned thing and I was getting very antsy, to say the least. That's when my mind started wandering. Wandering to a better place... OUTSIDE, in the warm sunshine...oh, my. 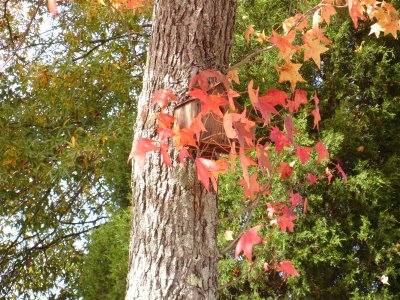 There is a blue bird apartment behind the leaves.

Taking a day off or time away from work for no apparent reason is referred to as a "Mental Health Day". In today's case, I'm talking about the freedom to choose whether to stay in my office or BREAK OUT! Hmmm... Sitting at my desk, my eyes shifted from one pile of work to the next and not a darn thing screamed out, "Stay! You have a deadline, dummy!" Then, I accounted for those who might miss me this afternoon. HA! No one! Oh, I had a reason to leave work, albeit a flimsy one to go to the central campus in uptown Charlotte. In ten minutes I was in my car. It was only 1:30 p.m.

Rolled back the sunroof and cranked up the volume. Started jamming to the music. Did I care if people saw me, a mature woman, gyrating like Taylor Hicks? Heck, No! I'll never see those people again, anyway. 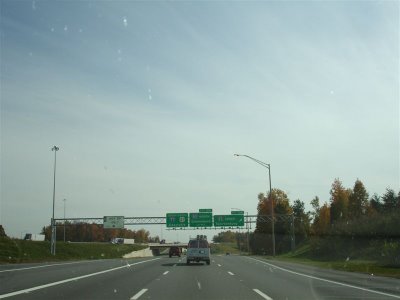 Taking a picture on I-77 South is risky, but I know of two ladies (whose names I won't mention) who make a habit of doing this... Volume up a bit more....Christina's new single made me belt out a few lyrics and I sounded terrible, even to myself! Then, a summer 2002 hit, "It's getting hot in here, I'm gonna take my clothes off..."

In 20 minutes, I was in uptown Charlotte. 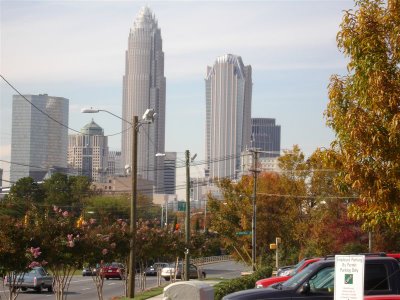 Charlotte isn't a large city but I love the skyline. It reminds me of Emerald City. It's clean and shiny with lots of flowers and foliage. 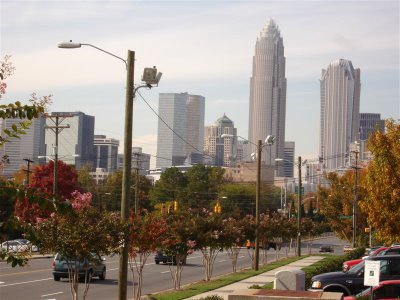 Gina works in one of those highrises - most of them are banking headquarters. I'll need to meet her for lunch one day soon.

The business I had only took about 20 minutes so I headed north for home. Still singin' and loving the afternoon. 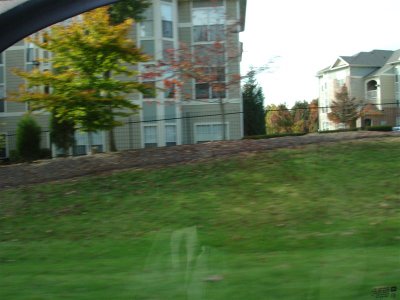 Camera happy again - passing Gina's apartment. I wanted to go in there and kidnap Mr. Biggins but it's a gated community. Darn!

My few hours of freedom were just what the doctor would have ordered. Whewww! What a day. No regrets.

Everyone needs a day like that, especially when they are just under the weather enough to justify it...so it's guilt free too! What better time to take it than one of the last few beautiful days before ole man winter rears his head? It's supposed to rain here tonight and is already getting cold and dark at 5:15...boy do I dislike winter!

I should have driven to Lowe's Motor Speedway and used the camera, Jane!

I love to skip out of work early - even just an hour stolen this way seems pprecious.