Poop on the Porch

Since I started this blog a month ago, I've met some terrific people. Many of them are animal lovers, naturalists, and bird-loving folks with great senses of humor and they certainly add another dimension to life...a bright and sunny one...and are always able to grab an audience for times of reflection on many subjects. To them, I am grateful. I especially appreciate posts about kids and dogs, but since October, I've learned some things about birds. I'm an illiterate bird-watching dummy and admit it! On the other hand, I have always loved being outdoors and filling my bird feeders and tending to the pond. Lately, I notice even more about things in life that went unnoticed. Journaling is work but you look forward to it. Camera always charged...thinking never stops.

From my photo archives, I'll share an experience I had with a pair of Barn Swallows this summer. We moved into our house a little over a year ago, and, under the roof of the front porch, the builder had placed a rock on the ledge to keep birds from nesting there. That rock actually turned out to be a firm base for a Barn Swallow nest...HA! Within a few days in June, a nest appeared on top of that rock. I watched the swallows work from sunrise to sunset, packing a sturdy nest made with red clay. 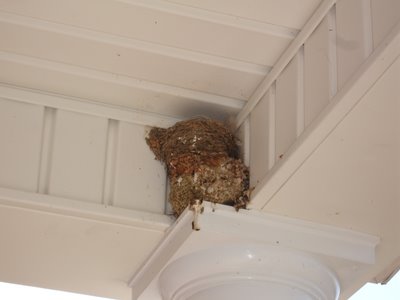 This photo was taken today. The nest is a mess and I'll need to clean it up. Lately, I've noticed feathers have been brought in and layer it.

Within a few weeks, the pair allowed me to stand a few feet from them. Mom slept in the nest at night and Dad perched on the opposite corner of the porch. 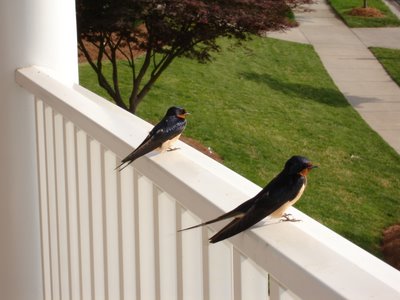 Soon I saw some tiny beaks rise above that nest and for the next two or three weeks, the feeding began in earnest. Gina and I spent many hours sitting in our rocking chairs and watching the feeding frenzy. The adults would swoop in, the babes would raise up and sing, "me! me! me! me!...feed me!" The drop would be made quickly...then silent. This routine continued every two minutes from dawn to dusk. We laughed the whole time. But in the oppressive heat on the west side of this house, I wondered if the poor birds would die of heat exhaustion. 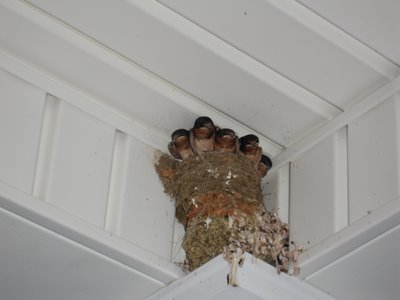 Lovely little fledglings! There were five in the nest and it seemed that within just two weeks, they resembled smaller versions of their parents. Perhaps the most fun Gina and I had was watching them poop. Growing too large for the nest, some real serious and skillful shifting went on to get that back end out and the aim right, then...p-p-p. Poop, poop, everywhere. Each day I'd do poop patrol for the dogs in the back then headed around to the front porch for another clean-up. I didn't mind much.

"Mom, the babies are gone."

"What? They flew out? Are you kidding me???? Do you see them anywhere? Did they get hurt?"

"No, Mom. They left this morning while I was out."

Somehow, I thought I might see them leave. I didn't even get a chance to say, "Have a safe flight and be careful out there..."

Sweet story - too bad they left without saying goodbye! I guess you still saw them around the yard?

I wish I could get barn swallows here - the closest I get is a farm stand that has them in their barns. I love to stand in there and see the swallows swooping in and out, paying me no mind at all.

They sound like nice porch companions - are you looking forward to their return yet?

Laura, they swooped by me and would stop in for a minute and check the nest for a few months. Haven't seen much of them since. I'm always looking for them and I hope they come again.

I love, love, love swallows!
We had a nice family of tree swallows take over our new Purple Martin housing and we got 5 pretty baby swallows this year. I can't wait for them to return. I have read that they can get here as early as February, because they can feed on berries since the bugs aren't awake that early in the year. That's why I planted a bayberry bush.

I love the shot with all the little ones over the edge waiting to take flight! This is a great story!

What a wonderful post Mary! Thanks for redirecting me to it as I only started reading your blog in late November! I love the shot of the babies! I do hope I get something nesting on that nook I have. :c)