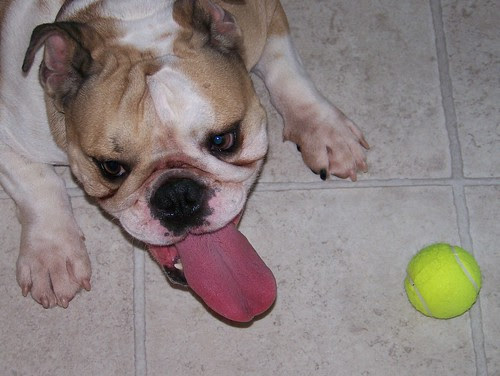 Don’t love me because I’m beautiful.
The face of an English Bulldog is so ugly it’s cute. Does anyone agree?

Our daughter adopted him on Saturday evening. Gina sort of forced the rescue as “Bam-Bam, Bamboozle, Bambino” spent a lot of time in a crate or tied outside. It’s too hot outside for a chunky dog prone to breathing problems. His original name is "Bam-Bam" so he’s being called a variation of names for now. I’d like for him to have a more dignified name. Bamboozle doesn’t work because he isn’t confusing in the least. Instantly upon meeting him, you know he loves play, food, and hugs. Period. My Chloe could have been named “Bamboozle”. It suits her.

Gina inherited my soft heart for animals and if she should ever move to a farm, she’d adopt every animal that came her way. 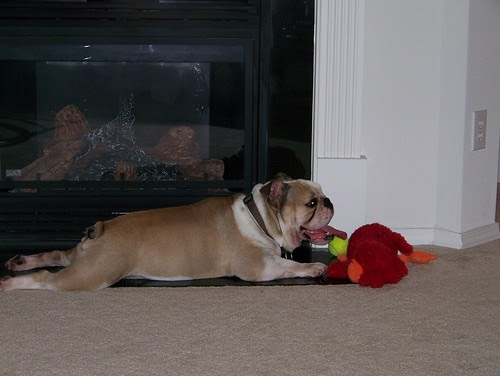 Just give me a minute. Let me cool my underneath here on this cold spot.

He’s an almost two-year old happy boy, well behaved, and housebroken. His stature is amazing and I wonder how his three-inch legs carry his fifty-five pounds of meat and muscle. Running at full speed, he crashes into walls because he can’t stop peddling fast enough. 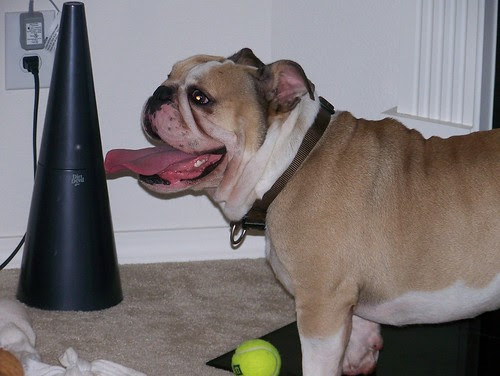 His slab of a tongue can lick you clean in two swipes. I wonder if I'll be bothered by it for long... 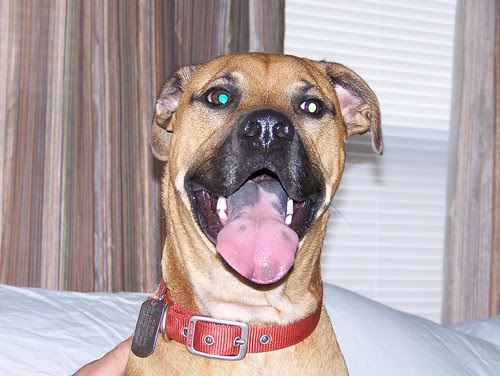 Mr. Biggins is sloppy in love with Bam-Bam, Bamboozle, Bambino most of the time but since Sunday he’s been showing his jealous side! BBBB doesn’t seem to care about the occasional growling and dominance from Mr. Biggins much and wanders off to bat his balls around. Speaking of balls, he’ll be going under the knife soon.


My husband, Michael, thinks we should take BBBB to live with us but I have enough to do. Without a bit of hesitation, I said, “No”.


He loves English Bulldogs and there is a reason for it.


It’s a known fact that dogs and their owners resemble each other quite often.


Michael is a good sport and was happy to pose for this picture.


Scroll down a little more. 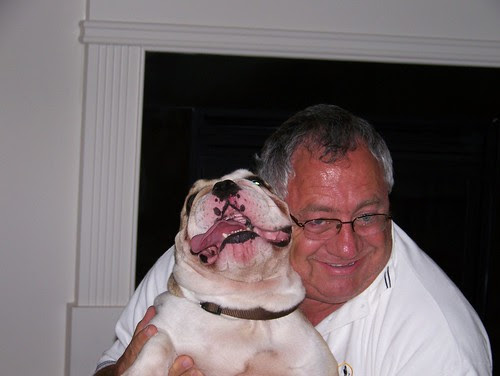 Bwa ha ha ha! We had so much fun with this photo!

We need to get a pair of eyeglasses for BBBB and ask Michael to pant.

More to come when BBBB meets the “girls”!
Too often, people with good intentions adopt pets without having a true understanding of the meaning of commitment. Pets give so much to us and we all should be able and willing to give back towards their happy and healthy life. I’m glad the owners of BBBB realized their lifestyle wasn’t suited for a dog that needed more than they can give.
Posted by Mary at 5:52 PM

I grew up with pugs so of course that face is perfect. I'm sure he and Mr. Biggins will work things out. You must be so proud of your Gina. I'm proud of her too.

Oh, and the picture with Michael- LOVE the jowls! On both of you!!

How about "Bubba Louie" (from Quick-Draw McGraw)??

Oh my. Mary, thank you for the laughter! What a great, great picture!

I agree with Lynne -- you must be SO proud of Gina. Rock on Bam-Bam.

I suggest Babaloo (from I Love Lucy). :)

I think you are wise to say no to another dog -- you'd know if it was right. The boys will work things out -- I'm sure that getting Bam-Bam fixed will help.

Bulldogs are such great dogs but I've never been tempted -- they are too big and sloppy for me. (Which must be why my husband wants a mastiff so badly. Hmmmmm).

Oh, Mary - this just makes me smile and smile. Bless all of you and welcome BBBB.

That picture of your hubby and the pup! It's just the GREATEST. Give 'em both a hug for me.

Oh My Goodness Mary!! ROFL!!! Michael is a great sport! I love BBBB's tongue - wow, he could clean anything up with two licks!

Dear Mary,
Laughing and crying at the same time!
Your Gina is so sweet hearted. I vote for nature reserves for both of you! Kind hearted people you are!
Michael is so funny. A great sport for sure.
Thanks, I needed a warm hearted story.
Hugs to all the doggies,
Sherry

"Speaking of balls, he'll be going under the knife soon"--You crack me up. BBBB does look cute stretched out in front of the fireplace. What a great photo of him with your husband. Kudos to your daughter for rescuing him.

What a wonderful post, Mary. You have made me smile on a very bad day/week/month.

My husband will be so jealous! He really, really wanted a bulldog, but I convinced him they had too many health problems (plus, I prefer Labs!)

I think Bam-Bam is a terrific name. But then I have a bunny named Boom-Boom (Boomer) - what do I know!

He looks like a giant pug! I think he looks kind of regal. I found this name on the Encyclopedia Mythica site: Bolla.

This is where it comes from:

In ancient Albanian folklore, Bolla is a snake-like (or dragon-like) creature that sleeps throughout the entire year. On Saint George's Day, it will open its eyes and look into the world. A human unfortunate enough to be spotted by Bolla will be devoured instantly. At the end of a twelve-year cycle it mutates into another being, called Kulshedra. This creature is a horrible, fire-breathing dragon with nine tongues. Kulshedra is sometimes also represented as an enormous woman with a hairy body and hanging breasts. The monster can cause a shortage of water and it requires human sacrifices to propitiate it. The creature is also known as Bullar in south Albania.

Some of that is definately weird, but the name would fit him nicely. ...... Just a suggestion.

I'm glad your daughter inherited your empathy and love of animals. You are both special people.

BBBB is lucky that she took the time and trouble to save him and it looks like he will repay with lots of love.

Your husband the BBBB definately look related -- it's the smile! Love that picture. I'm sure all of the furry kids will be getting along fine. Now you have a grandson!

I officially love Gina. And Bam-Bam.
We all need a nature preserve. Don't think we would have any trouble filling it up!

Oh goodie--another dog for us to hear about and laugh at the antics of.
You tell great dog tales; with BBBB added, there should be even more to tell.
And love the photo of your hubby & BBBB.
Do tell how meeting the girls goes!

Well, if anyone needed a laugh today, they should have visited your blog. These dogs have the kind of face you want to love - just look at that smile! :o) I do see a small similarity between DH and BBBB. ROFLOL. What a good sport your hubby is.

What a riot! Love the pic!

Toooo funny, thanks for the early morning laugh! I was gulping down a cup of coffee when I scrolled down to DH and BBBB, needless to say I had to wipe down the screen. Coffee and cream make a great glass cleaner!

Hi Mary,
What a great post and what a lucky dog BBBB is. It's great Gina now has 3 happy guys at her house. And you have a new grand-dog that looks a lot like his grampy! (thanks for sharing that funny photo)

Oh I do love bulldogs. I've always wanted one and am hoping in my retirement years to get one--a rescued one though like BBBB. I even named my Honda Element "Bulldog" because of its smooshed-in front end.

I already have my dog's name too. Onslow--named after my favorite character from the British series "Are you being served"

That picture of your husband with the dog is priceless!
Your daughter sounds as though she has a heart of gold...

The best, the best, the best. What a lovely dog, and how wonderful that at only two he gets to start over with another family who understands how to take care of his needs. Having grown up with the Looney Tunes bulldogs with their pugnacious attitudes and spiked collars, it was such a pleasant surprise to meet a few bulldogs and experience their smooshy-sweet personalities. How anyone could give up a dog so nice is beyond me, but then disposable pets are becoming a norm in our society. Baker sends Gina and you and BBBB a big wet kiss. Yayy Gina! Michael: Good Sport award! I have a series of pictures of BOTB making googly eyes with Baker held up by his face, but have not yet gotten the signed releases...

Fantastic photo of the look-alikes!

what a funny name to such a cute dog! "Bam-bam , bamboozle bambino! I bet you cann't say that twice fast! LOL! How wonderful your daughter adopted him!

is that hubby on the left?

Hahahahahaha...GREAT picture, Mary! My wife says my cat and I have the same personality...and I don't think she meant that as a compliment!

Oh My Gosh! What a wonderful dog!! I love him. I love dogs, and I have 4 of them. Lovely site. Thank you for visiting my site. xoxo Nita

Mary, I wondered if you got another dog when I saw that shot on Flickr! Had to come and see. Your husband is a great sport, and wait until the next holiday, when you have all four dogs bouncing around!

I think that "Bambino" or maybe "Bambi" because of the incongruity of it suit him fine. He's adorable.

I have always adopted abused and abandoned animals, including a very beloved gray wolf and horses. Now I live in a city apartment, and have only a cat, but I play with other peoples' dogs at parks and beaches.

There is nothing like a frisky puppy to add joy to your life. Thanks for sharing the baby pics. Oh, and your husband? He's a goner. It looks like true love from here.

Mary, how nice that Gina is cut from the same cloth as you! And Michael is a hoot! Love the new addition!!!! Can't wait to hear and see more of him. Bless Gina..and bless you too!

Boy -you got me laughing on that one.-You must be hanging out with sailors with language like that!-very funny!

Loved the pictures for all of them. Ever think of publishing a book of your fav photogs!

Lizzy A. in Hot DE