Well, well, well. I see I can post now. But I'm at WORK! All weekend long I tried to create a new post and Dear Blogger wouldn't allow me. I even went so far as to post a comment on the Blogger Help Group site and I found that I'm not alone - this free service by Google is a freaking can of worms. Now I'm hoping that there is nothing wrong with my computer at home....hmmm.....I'll see about it tonight. Michael left for Charleston again for the week so I'll have time in the evenings to mess with Blogger (punch my fist through the damned monitor) since I only need to reheat a few things for my dinners (how nice...)! This post will be a quicky - I have loads of work to do here.

On Friday, the NETHERLANDERS descended from their tour bus and visited our campus. Forty-three of them, from high school teachers to college presidents. I was charged with planning and setting up an attractive refreshment table and I was also asked to be a tour guide for a group of twelve. Well, that shot my workday to hell BUT it was worth it. If these happy individuals are a sampling of life in the Netherlands, it must be a wonderful place to be. Generous smiles and laughter, firm handshakes, good eye contact, and good command of the English language. The very first thing I noticed about them, as they left their bus and entered the front doors of our building was that the men, particularly, had similar facial features...long, rectangular faces, large chins and foreheads, deep-set and close-set eyes, bushy eyebrows, and little round noses. The women only had long pointy noses in common. Just an observation from me - doesn't mean anything, really. I'm quirky that way.

The only productive thing I did this weekend was read Julie's book. I had to fight with myself to put the darn book down and get to bed at 1am on Sunday morning. It is that good.

Here are some photos worth sharing that I took this weekend and I certainly hope the first photo doesn't scare the bejesus out of ya: 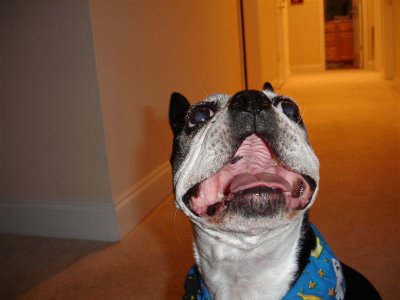 Chloe...jeezzzzz. Have you ever seen a mouth as wide????? I'm trying to think of some object to compare it to, but in my rush, I can't think...maybe a plunger? 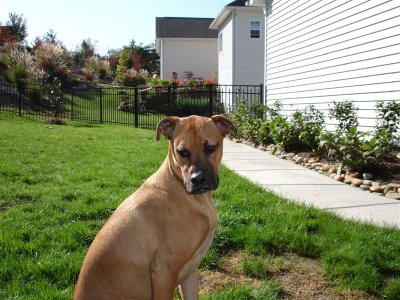 Mr. Biggins visited while Gina was out with Michael. I think he was missing "HIS MAMA"! 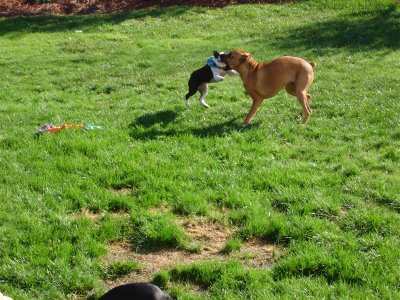 Bella, pushing around Mr. Biggins (real name, Austin). That poor guy doesn't stand a chance with these women bossing him all over the place. See Chloe's rump at the bottom of the picture? Yep, digging again. 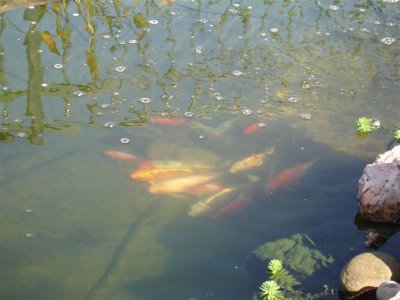 Cold nights, koi and goldfish snoozing three feet under. Strange how they sleep lined up and facing in the same direction. 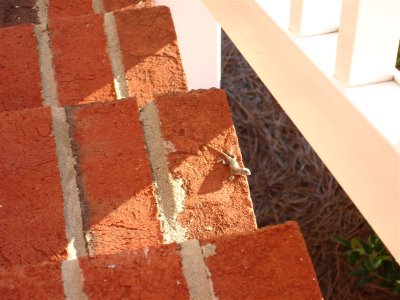 I Love Little Lizards! His name is DINO.

Picture of the weekend: 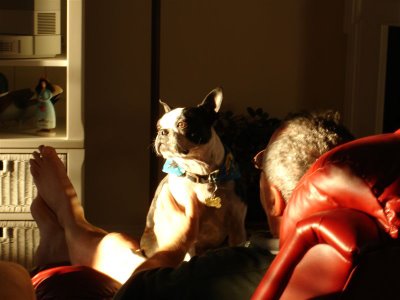 Bella and Daddy. For her, there is no better place to be.

I'll be back if Blogger allows. I'm still fuming.

Loved the pictures Mary, but the last one is my favorite. The lighting was really neat. I have a similar picture of my hubby on his easy chair napping after laying laminate wood flooring in our great room. Chili Bean decided that she was tired from all that work also and curled up laying on her back between his legs with her four up in the air. It was so cute I entered it in a pet photo contest but of course didn't win. It's in my photo album as a winner though! Yours should be also.
Jane

I think the one of Chloe looks like a snapping turtle in pursuit of a fly.