does wonders for a tired soul in late January. I’ll get to the gift later. 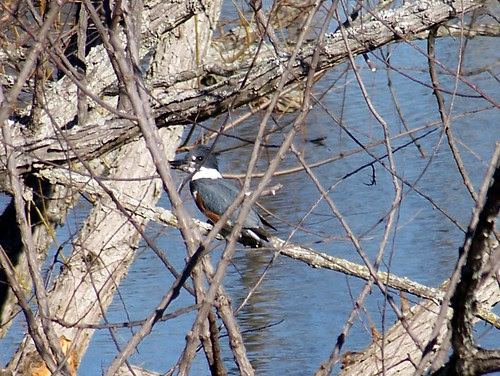 The best photo of a Belted Kingfisher I’ve taken so far but not good enough! 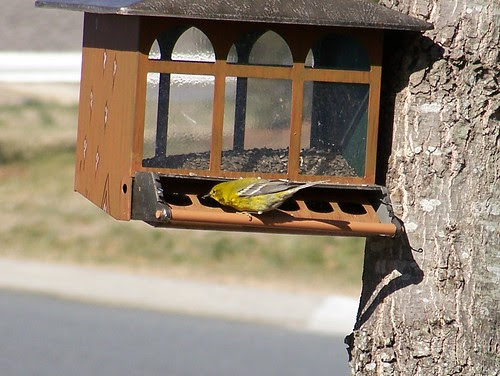 I’ll share all of the few photos I’ve taken this week, one of which is a photo of a Pine Warbler on campus. A lifer? Yes. Why am I not thrilled? Because, 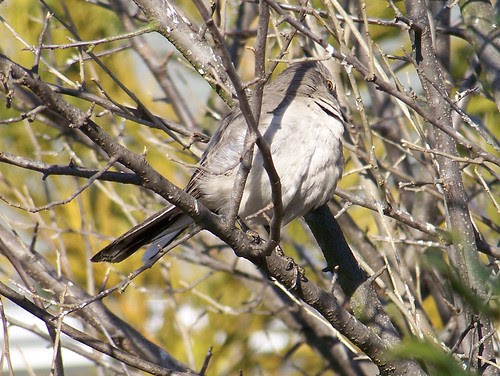 it’s been a real struggle at my house. The Mockingbird saga continues but the situation is getting a little better. He’s still in the attack mode, but less often, and I haven’t seen a dead house finch since last weekend. Earlier in the week, I let the feeders dry up for two or three days in hopes he would leave and check into rehab due to dough withdrawal. Take the house sparrows with you, too!

There were only nuts and store-bought suet cakes on the birds’ dinner table. No seed. And a rain storm was approaching on Thursday evening. One hundred birds were waiting for me and the Nuthatches and Chickadees returned from their long vacation away from here… 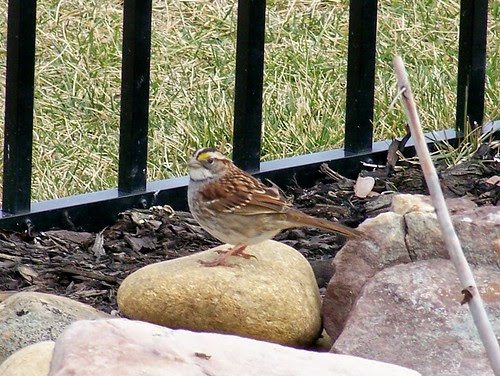 How could I deny all of them? 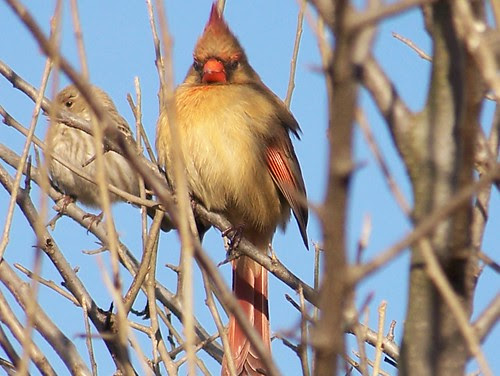 How could I deny my resident beauties? 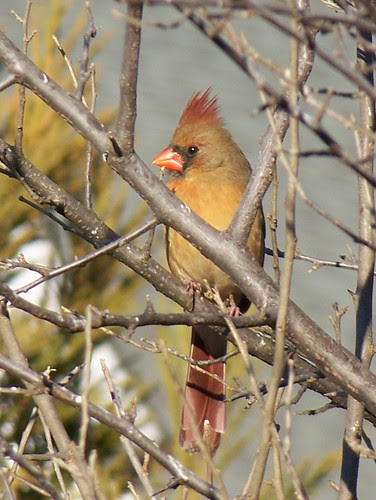 I stood on the deck and watched them waiting for the “evening fill”. In just a few minutes I decided, “No. Can’t do it. Won’t deny them.” A flock of Cedar Waxwings flew overhead while I brought out the BOSS and Thistle and showered all of them with an intoxicating amount Zick dough. We’ll get through this, somehow.

Back inside, dinner in the oven, I opened a surprise package from Jayne at Journey Through Grace. All I did was count nearly eighty Goldfinches in her backyard... It was a fun task and I most certainly did not expect a prize. 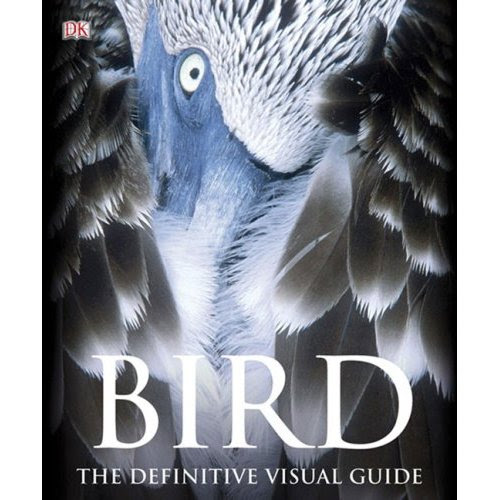 A large, coffee table style book, with over five hundred luscious pages of the most glorious birds of the world you will ever see! It’s more than a field guide. Numerous topics are covered including anatomy, birds under threat, extinct birds, habitats, and much more. I can’t keep my hands away from it as the photography in this book is absolutely stunning. My toes haven’t uncurled yet. 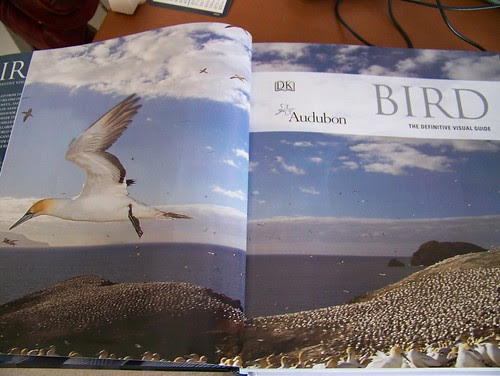 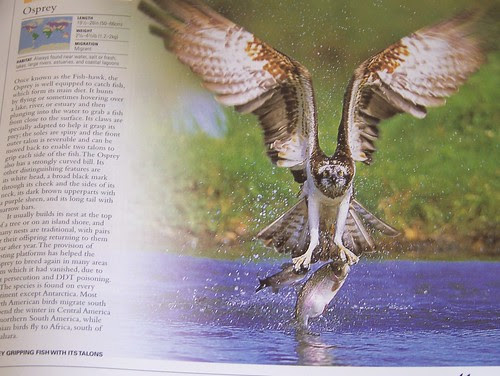 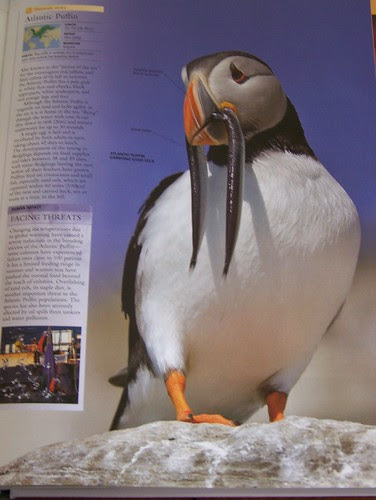 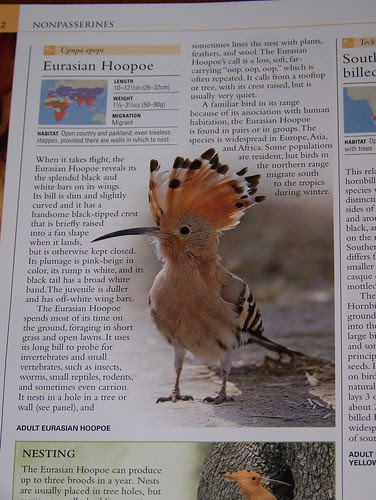 Eurasian Hoopee, in search of peace pipes and local Pow-Wows in the wrong places. 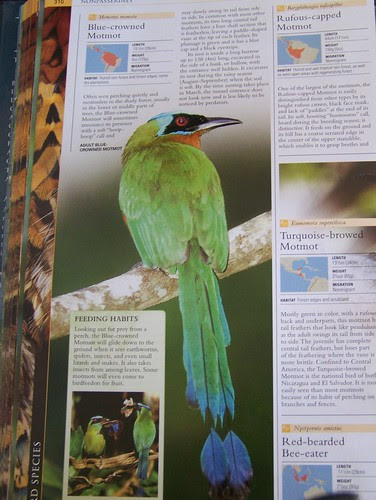 Wonder if I can get a low fare on a round-trip to South America? Ooooo. Motmot. Love the name. 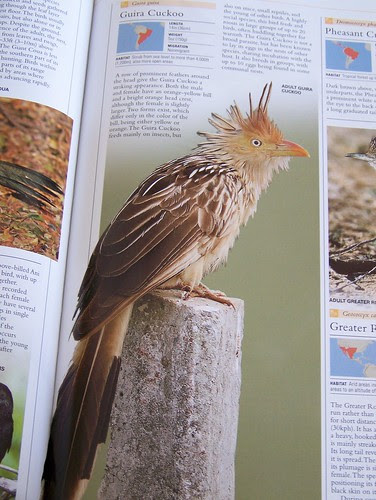 Me in the morning, right out of bed. 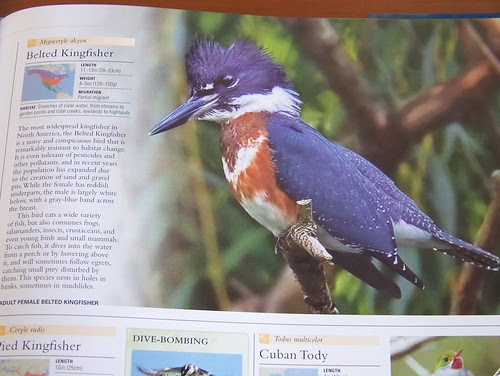 Now, THAT’S a great photo of a Belted Kingfisher!
Jayne, thank you.
Your Georgian accent is as sweet as you and your grace arrived when I needed it.

Woooo hoooo what a neat gift.

WOW! Thanks for the mini-tour. Zoey and I were drooling over your new book.

And is that one of my summer white-crowned sparrows?

Wonderful gift and congrats on your lifer! Those Pine Warblers are such great birds and nice they sometimes come to peoples feeders!~ Wonderful photos as always!

What a great book for you to browse through. I'm glad you didn't deny the birds because of that ol' Mockingbird.

And guess what, my patience has been rewarded. I had all kinds of birds at my feeders today. I think I'm going to have to refill them tomorrow!

What an awesome gift and well worth taking the time to count all of her bewds! Congrats on your lifer, and your wonderful photos, as usual!

That female cardinal is a beauty. You did a great job with her pictures. It is so hard to deny them food isn't it? I made Zick dough again knowing only the starlings were going to eat it.

Mary, what a stunning book. I'm so glad you won this prize. You are clearly getting so much joy out of it. Congrats!

My favorite caption: Me in the morning, right out of bed.

I loooooooooove your blog...keep up the great work!

Great birds and a great book! Your Pine Warbler is sweet. I like the photo of the over-achieving opsrey, with a fish in each talon.

You were mightly blessed. A lifer bird then a lifer book. ;)
Love the picture of the female cardinal. It looks to be framed by the limbs.

I'm so glad you are enjoying it Mary! And, as an FYI to all, Amazon now has this beauty of a book listed for only $31.50 which is a steal seeing as how at Christmas time, it was $50. Hmmm... wonder how that works?

Mary I am sooooo jealous. That book is fantastic. I ordered it for our library and can't get any of my other responsibilities taken care of because I always have my nose in it!

If we don't hear from you in a while...I'll understand.

What a wonderful present! That book is going to fill your hours with pleasure. The publishing company "DK" produces excellent nature and animal books. I gave my daughter one which was an animal encyclopedia and I didn't want to give it up! The photography they have is just breath-taking. Lucky you!!

I would say your photos are pretty close to being as good as your new book. Anyway, they were very enjoyable and I will tell my birding friend at work about your Pine Warbler. He will be impressed.

Try not to ignore the girls and hubby too much today while you peruse that pretty book! My motto: You can't have too many books!

Congrats -- it's such a wonderful book! Hope your obnoxious mocker starts behaving better, soon. This is getting ridiculous.

Dear Mary,
Jayne is a dear heart! I will look for this book, it is beautiful. I need more coffee tables!
Your photos are just getting better and better. Mrs Cardinal is stunning!
I need a few new birds! All my regulars are beautiful but I am ready for a few "new to the backyarders" to photograph! A Pine Warbler would be a lifer for me! Darling bird!
Glad some rain came your way.
I would go to South America for a "birding adventure" with you anytime! We could look at butterflies too.
Great post!
Hugs,
Sherry

Lovely gift and the illustrations are so great :)
I always enjoy seeing the pictures of your birds, Mary ...
xo

Now that's a nice gift! Glad it uplifted your spirit!

A fab gift. You are a lucky lady -- well, except for the mockingbird.

Wow...first off...your shot of the kingfisher is really good! I haven't even seen one of those much less been able to take a picture.

2nd....your shots of the female cardinals are so LOVELY!

3rd....I want to go out and buy that book. It looks Absolutely FABulous! Wow!!!

Oh Mary, what a wonderful prize!
Jayne is such a great gift-giver!
That book looks like a winner for sure.
Congratulations on your lifer.
I just see the "same" bewds on my feeders...love seeing all the different ones that visit yours.

A white-crowned sparrow! Look at those gorgeous yellow lores! And to think I din't even know what "lores" were until a few years ago. I learned about them from trying to ID white crowned sparrows! Then I saw them on a black-throated gray warbler in Utah. Nice little accessory, don't you think! Get post. And I agree, you can never have too many books!

Thank you for feeding your birds, Mary :-) They will reward your kindness :-)

That's a lovely gift, Mary - and you're sure the right person to appreciate it.

But when you tell us how many birds you're supporting it makes me wonder if paying their food bill is the main reason you go to work every day ;-]

May you someday get to check off every one of those birds on your lifer list!

I've long coveted that book since I saw it on 10,000 birds. Did the mockingbird kill a house finch? Wow that is something - he needs to go to ZDA right away (Zick dough anonymous). Your posts always bring a smile and that's a gift too!

What a great gift! I looked through a copy at the bookstore & put it on my Amazon wish list & forgot about it until I read your post. Don't forget to check out the gouldian finch page of the book!

What a wonderful colourful blog, so cheering on a cold and wet night in England. Just love your beautiful bird photographs.

More gorgeous bird photographs, Mary. You lucked out on this book - those Atlantic Puffins are adorable. I wouldn't mind having one of them in my back garden.

And, I forgot to mention in my last comment that it's great news you fit the smaller-sized pants. Way to go!!