The Girl Has an Attitude

Chloe is my nemesis. This description might seem harsh, but for more than ten years, I have loved her for reasons I can’t describe right now. While writing this post, I’ll figure it out.

We chose Chloe from a litter of six when she was five weeks old. A cute and tiny Boston Terrier puppy. Oh, giggle, giggle, joy, joy! Chloe and her brother Jake were the last picks. When Chloe was eight weeks old we drove to Blue Bell, PA to bring Chloe home. The owners of the farm met us on their driveway. Great people, who bred two females twice a year to pay for private school tuition. Emerging from our car we saw two puppies playing in the front yard. One was sitting lazily, chewing on a blade of grass and the other was running circles around the other pup, carrying a two-foot long tree branch in it’s mouth. This pup was in a frenzy. Could that be Chloe? Yup. It was she. Hmmmm. I felt the hair rise on the back of my neck.

For three nights, she slept in a crate in our bedroom, equipped with warm fuzzy things and a tick-tock clock. Her whine was loud enough to wake the dead and Michael camped out downstairs in the family room during those nights. I went to work in a stupor for a few days and sat at my desk thinking, “What in the world have I gotten myself into?!” From the very first day at home, Chloe wanted to rule, no doubt. I needed to grab her by the scruff of the neck, hold her in a down position, and growl at her…and soon after that, she acted as if she knew who the boss was in the house. Without fail, though, the look on her face told her story, “Ok, try it. I’m ten steps ahead of you, woman!” She was too smart. Everyone loved her but I didn’t know if I did, or not. I posted the phone number to the Boston Rescue site on my refrigerator door for two years. Why? Chloe was, and still is, incorrigible. I have never ignored her and always provided endless exercise and loving attention, as I am a serious and compassionate lover of dogs. It wasn’t enough. She was born with an attitude. Most of these incidences happened during her first five or six years. I listed them below, following the photographs. 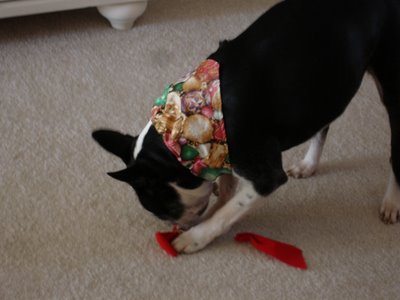 Yesterday, the holiday stealing began. She has eaten and mutilated glass, wooden, and plastic tree ornaments over the years...probably about ten dozen. Out of spite, I guess, and getting a rise from me. Yesterday, I ignored her folly. It's hard to ignore her when there might be a hook attached to the ornament... 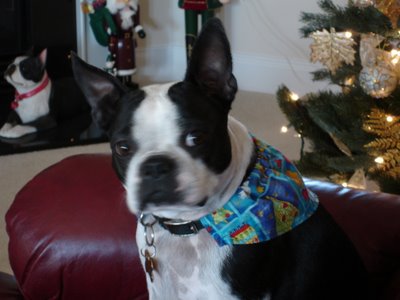 Bella witnessed the attack on the red ribbon. She's the first one to retreat, look guilty, and avoid eye contact with me after Chloe's antics. I coaxed her to look at me with the camera. What does her face tell you? "Please, Mom...it was Chloe...I didn't do it."

She went into heat early, at five months, three weeks before her scheduled spay. She was cranky and had a false pregnancy.

Early on, she perfected her stealing and running technique. We were the only family I know who ate dinner with a shake can on the kitchen table. My neighbors enjoyed her antics for many years, especially on the day Chloe slipped through the back door with the TV remote control and ran full speed through the yard with it. She’d stop long enough to chew, then run again. She’d steal steak knives from the dishwasher and other dangerous things that made my heart skip a beat and panic…on a regular basis. Ripping pot holders under the bed made her day!

She was (and still is) incredibly fast and more agile than a cat.

In the early years, her daily agenda included, “Make the woman chase me. Drive her crazy. Yowzaaaa!”

She caught a bird in flight and ate it, leaving only the skull.

While taking a walk, she's the only female dog I know that lifts her leg.

She fetched a small bunny and ate it completely.

She terrorized our cat but dear Ralphie lived a full sixteen years.

An Eastern box turtle suffered the grip of her jaws and after I slung a fifty foot coiled garden hose on top of her, the turtle rolled out of her mouth into the safety of my hands. I applied an antibiotic to his back and released him to a safer place.

I dangled a pork chop over her head in hopes she would drop the mole she killed. It worked. I scooped up the dead mole but kept the pork chop - only giving her a small piece as a reward for "giving it". That’s when I knew she might be getting a little more manageable.

Chloe annoyed the hell out of a swarm of hornets and had hives for a week.

A bee sting blew up her face to the size of a swollen Chinese Shar-pei, if you can imagine that!

Her phobia with veterinarians has been hard to handle. We even had a mobile vet come to the house a few times over the years and he suggested I purchase a stethoscope to practice with her. It didn’t work. She also freaks out when she is picked up off the floor unexpectedly.

All of this gives a clear picture as to why I wonder how I love her so. 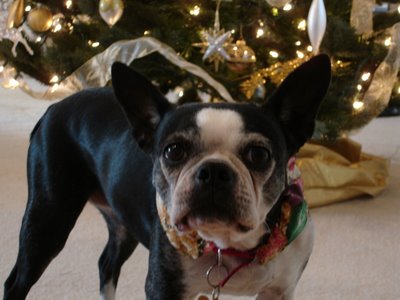 I guess the reason I love her unconditionally is because we have grown together for more than a decade. We made it. She is mature now. I survived the challenge and we are both still alive! Chloe has cataracts now and has a growing skin tag on her back. I’ll probably be leaving her at the vet in January for the first time since she was seven months old. Oh, how I’ll grieve beforehand and sob on my way to the car after leaving her, with her lead in my hand. It will be gut wrenching for me, and her, too. After all, she’s my black and white girlfriend from way back… 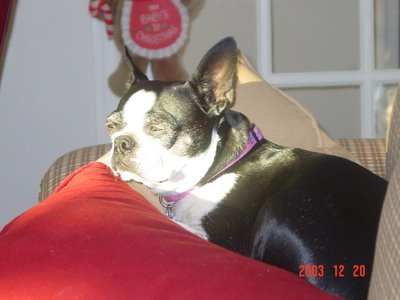 My sweet Chloe, the thinker. Never met a human or dog she didn't love. Except for the vet, of course.

Wonderful tribute to your Chloe. I can only imagine the antics you haven't mentioned in her ten years with you!

I think a person starting out with a difficult dog would be easily discouraged, but if you've known enough dogs (or bunnies) you begin to appreciate them as individuals in spite of - and because of - their *challenging behaviors*.

Thanks so much for reminding me of some of the nutty things my dog has done over the years - mostly as a pup - thank goodness!

I remember all these antics...she has 'personality', imagine how boring she would be without it!!!
she has most definately been worth it!!!

Do you remember Chloe and Magic, the great dane? Remember her running zig zag around Mandy and Ginger in your yard? LOL!

Thanks for this post Mary and your advise. Chloe is a free spirited gal and you are her world. Love it! -- Lizard

Chloe came into your life for a reason- she's a lucky dog!