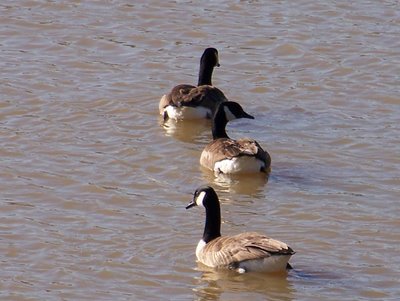 There is another new pond in my community and, lo and behold, this is the first time I've seen a flock of Canadian Geese in it - probably thirty of them! After my leisurely lunch yesterday with a friend and my husband, I stopped to visit the geese. Since the ground is soft and saturated, I had to stand at the top of the hill and not get close, relying on my new zoom! I nearly lost a shoe in the mud trying to get to their level. Without having a bag of bread with me, I thought I'd play it safe, as I've been attacked by them before (the spoiled ones). 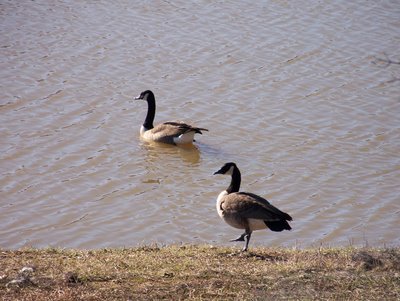 Taking in the beauty of the day, I stood there for quite some time and relaxed.

It was a good day.

Later in the evening, Gina brought Mr. Biggins to us for his "vacation with Gramma", as she and Billy were catching an early morning flight to Austin, TX for a five-day visit with his step-sister and family. Later in the evening, she called me and I heard a frantic cry, "Mom, I'm taking Nala (her cat) to the emergency vet. She swallowed a sewing needle!" Being a mother, the first words from my mouth were, "How did she get a sewing needle?" The question I asked wasn't necessary, but I couldn't help it.

Some other conversations I've had with her come to my mind as I compose this post. Two years ago, when she lived in Wilmington, NC, without enough money to feed herself and still on our payroll, she bought a cat and a dog. Her decisions were not the least bit popular with me and I reminded her that pet ownership is quite expensive and things happen to drain your bank account real fast. But NO, she wouldn't listen and now I have an opportunity to say, "I told you so!" But I won't. Last night she admitted to being careless with the cat and cried. I didn't say a word. After x-rays at the emergency vet, Nala returned to Gina's apartment last night and it was planned that I would pick her up and take her to the regular vet in the morning.

At 9:30 this morning, I arrived at Gina's apartment and found Nala, her emergency vet report, and an x-ray. By that time, Gina was in Dallas/Ft. Worth, still sniffling over Nala.

Nala refused to go into the cat carrier. She fought me. Hard. Knowing I was losing the battle and also knowing she was getting sick of me, I knew I needed to be creative. She hid from me. An hour passed.

For a while, I thought I'd leave and try again tomorrow...but...what if she became seriously ill? I couldn't just leave her! Since the cat carrier was a no go, I looked around and found a rubbermaid drawer in the dining room loaded with dog toys. I dumped them, closed all doors and barricaded the sofa so she couldn't slip under it. She was cornered. I shoved her into that drawer so fast she didn't know what happened and after ninety minutes of games, we were on our way.

Nala was quiet on my passenger seat and I kept the drawer pulled open enough for her to get air. I guess the 30 minute ride was too long for her, as she peed, vomited, and pooped. Windows went down.

As I pulled into the parking lot of the vet's office, she squeezed her way out of the drawer. Slamming the brakes and rolling up the windows simultaneously, I panicked. But she just stood on top of the drawer, smeared in vomit and poop, looking at me as if to say, "Where am I and how did I get here?" She came to me and I held her gently.

I was irritated with the whole scenario since the night before. This whole darn deal did not set well with me as I reeked of foul odors and was longing to spend my day off in other ways. Selfish? Yes, a little.

In the examining room, I hugged her sweetly. We waited for Dr. Mark for quite a while as he was euthanizing a dog...sad. Nala was calm and cool as a cucumber, sitting on my lap, and I realized how tiny her head is. I called her a pea brain. Her big, marble green eyes peered into mine and we touched noses as she purred and nuzzled into my neck. With a teary eye, I told her that I hoped she had intestines made of steel and I would be back to bring her home soon. 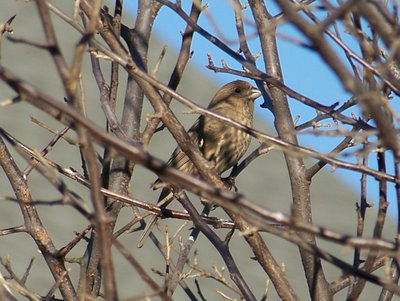 I worked hard around the house this afternoon and I am spent. I did, however, find a few minutes to look closely at this little sparrow.

Thanks for helping me appreciate geese through your eyes - I see them so often here - them and their poop piles - I do love their little fuzzy babies in the spring! O-M-G - how *does* a cat swallow a sewing needle? I'm trying to picture it.
I know it isn't funny - but you were cracking me up - the way you write is great! "Windows went down." Hopefully she is okay!

Oh Mary - what's the end of the story? Is Nala okay?

I hope your DD is enjoying her time away while you wallow in vomit and worry! Jeesh!

Kids and their animals - you are a devoted mom. ;-)

Your pic is of a female house finch. See the beak? Looks like a cardinal's? Finch. Nice pic.

I'm sorry - I did forget to tell the end of the story. Nala will be watched closely for the next few days at the vet and will be given meds to calm down her digestive track. If she passes the needle, all OK. If it gets lodged, surgery. We have our fingers crossed. Both vets say there's a good chance she'll pass it. Dogs and cats can pass almost anything and even though I'm hopeful, I'm not sure about this one...

One of our dogs (the stupidest springer spaniel ever!) swallowed a sewing needle and attached thread. The vet told us to feed him as much bread as he would eat, and "wait and see". The greedy guy ate 3/4s of a loaf of bread and then passed the needle with the dough. I don't think you could force feed a cat bread slices, especially one that is prone to vomit.

What beautiful photos of the geese.

Oh my... what a day with Nala. I hope she is able to pass that needle with no complications.

Poor kitty. And poor you, smeared with cat vomit and poop. Pee-eww!
It makes my stomach hurt to think about a needle passing through her delicate little innards. I hope everything "comes out okay"!