Welcome to My World...away from home

I apologize for anyone who might read this. It's too damned long! Why? I was in a photo frenzy today as you will see. Also, I apologize for poor grammar and spelling as it's getting too late in the evening for me to spend time checking. My spell check tool isn't working. So here goes.

This would have been a great thing to do during the past decades! Blog! Today, I'd be able to take a walk down memory lane and revisit my old places of employment and other wonderful things that I enjoyed, and perhaps some dear friends and acquaintences! The images of the people and physical buildings are etched in my memory but there's nothing like digital photography and a little narrative to go with it.

As a child, I was a mimic and keenly interpreted others' idiocyncracies and personal habits, i.e. their voice inflections, the way they walked, and the way they used their hands. My family wanted to boot me out of the house sometimes with a slap on the head but it didn't stop me. I notice everything and remember events, every day routines, out of control laughter with co-workers including subject matter verbatim, pulling pranks on the office curmudgeons, and whatever else made me squeal. There have been times when my sense of humor caused eyebrows to raise, though, which made the situation even more hilarious to me - like laughing in Church! Sadly, some of the people I lived and laughed with for many years have left this earth. Some have moved far away, and many of them are still sitting in the same place, where I used to be.

Today, I didn't take photos of the people I've been working with for the last six months, but it's on my agenda! I just want to exhibit the ambience at this community college. This atmosphere is far different than I have ever experienced and probably is for most other people, too.

Here's the first thing I see while pulling into the parking lot early in the morning. Today it was very dark and misting rain lightly so the photo isn't very clear. 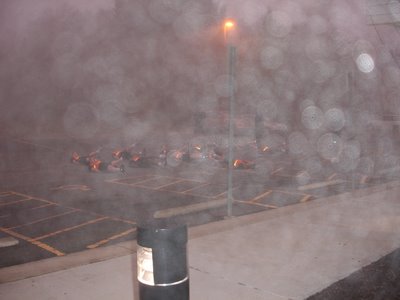 These are police cadet recruits on their backs in the parking lot (see their light reflective vests). They're exercising while the Sergeants are shouting orders and they shout back "Sir, yes Sir!" This is after a 3 mile run. Some of them are being reprimanded. If I were one of those being reprimanded, I'd run away sniffling and sobbing to my car. There are two very young, small women in this group doing a great job and I have never heard of any of the ladies quitting. That says something for the little ladies, doesn't it? Some of the men cry (breaks my heart) during this grueling seventeen weeks and drop out. Whatever they choose to do, I give them credit because they are building strength in character, learning survival techniques, and law enforcement perishable skills that they will continually revise, year after year.

Recently, I described my workplace as "white and colorless". This is the view from the entry of the doorway I use. It's one of the entries to the criminal justice building where resides the American Academy of Applied Forensics, and where training takes place for all first responders. It's sterile looking, institutional, and I've seen hospitals look cozy in comparison. 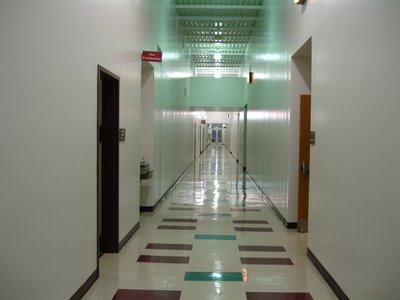 Not a colorful place - coziness not welcome! 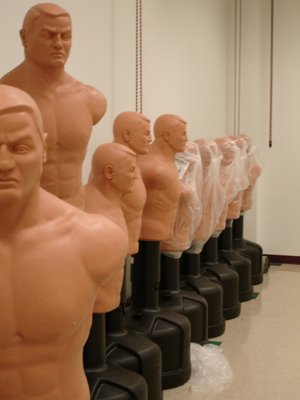 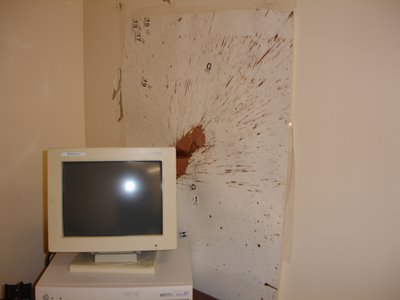 See the blood spatters? (Shivers!) This is one of rooms in the crime scene annex used by the American Academy of Applied Forensics, nationally acclaimed. Mock crimes are committed here. Once in a while I play a part in them when investigators and law enforcement officers are being trained in interrogation techniques. 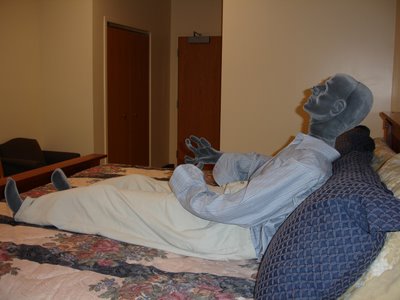 A dummy with a gunshot wound. This another crime scene room in the annex. How lovely! 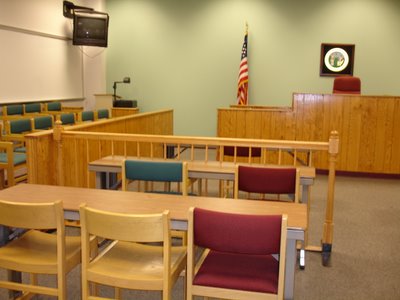 Here's the courtroom where I've participated in mock trials, once as "Nurse Rosemary" in a baby-snatching at "Spiceville General Hospital". This mock trial was to benefit the Carolinas Healthcare System. 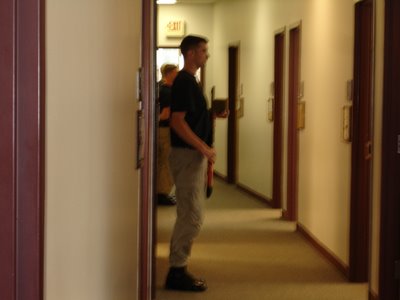 Cadet at attention outside of my office and waiting for Sgt. Moore to call on him. Blurry photo and I don't know why. 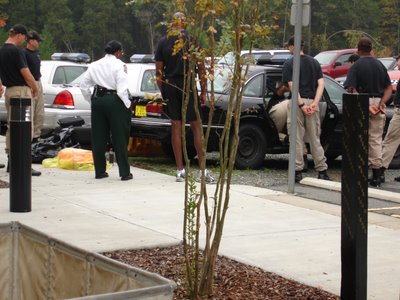 This is a demonstration of policing for drug paraphernalia in a vehicle. See the large bald man in line with the tree? That's Sgt. Moore, exactly 7 foot tall. His office is directly across the hall from mine and I am certain he'll flatten me out one day, as I'm not even in his field of vision. I'm only 5-2" and that's stretching it! 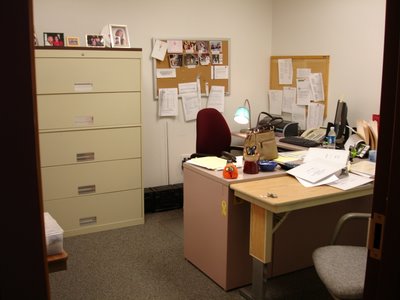 Finally, an angle of my windowless office, not neatly arranged today, but hey! Who cares? It's where I let my umbrella dry and display my favorite things and silly photos. Not similar to anything else in this building and I'm proud!