Running out of time this evening to produce a thoughtful blog. I just gotta spit it out! Michael's old friend and business associate from Parkton, MD is flying into Charlotte from BWI tomorrow morning for a fun-filled weekend of golf and NASCAR. Yay! for the golf, ICKKK for NASCAR. Whatever floats your boat, I guess. This weekend plan prompts my tired body to be certain the guest bedroom and bathroom are in pristine condition. As for the rest of the house? Who cares? Men don't care if there's a thick layer of dust on the window blinds - he won't notice...but, I do.

Trying to be focused and thoughtful toward a decent post today, I took my charged camera to work, not even knowing what I'd photograph... I realized too late that the college is on fall break. Too bad. It would have been great to photograph the police cadets in formation. I would have photographed the younger students in their spiffy attire. Joking about "spiffy", because it's downright degrading. I'm talking about the pitiful "pants below the crotch tied tightly by a belt" that tempts me to race up behind one of those cool guys and yank their pants down and run! And the scantly clad little ladies wearing spaghetti straps that show their "poor excuse for art" tatooes and the low-rise jeans that expose their navels. Many of these chicks are too fleshy for that and should be wearing a tunic. Examining their wardrobes makes me wonder if they are all orphans! Where are the parents who are supposed to be preparing them to look like responsible adults instead of "just-rolled-out-of-bed slobs"? And what in the world is wrong with the colleges that are afraid of DRESS CODES? I am truly grateful that my daughter, Gina, who is 24 now, always knew how to dress respectfully and appropriately, in good style. Ok, I'm off my soapbox for now. 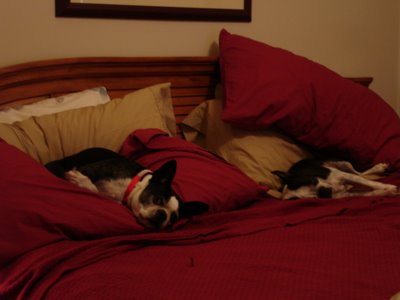 Before I left for work at 6:50 a.m., I turned and looked back at Chloe and Bella. They hop into our bed while I'm showering and getting ready to leave. One was snoring louder than my father with sleep apnea, and one had one eye open on me as I said, "See you later, girls." It's a dog's life.

I never eat breakfast before I leave for work and today I was so hungry that I was near nausia... Lately, I've been falling off the healthy wagon and caving in to the powerful cravings of salt and sugar. This is bothering me. After losing ten or fifteen pounds since 05, I don't want to deviate from my eating habits that have worked so well. So, in my office, I opened my top right-hand drawer of my desk. 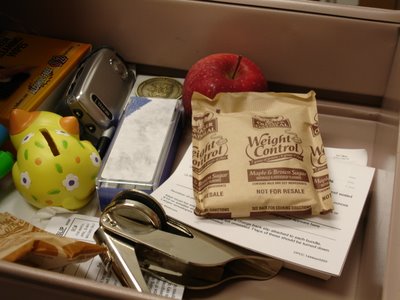 In there, I see an apple that's not a McIntosh (my favorite). It's a hard apple, to boot. And instant oatmeal that I love to eat. Hmmm..... The vending machines have cookies.....!

At 8:30 a.m., I made the oatmeal and ate it. The hard, tasteless apple polished my teeth, at least. 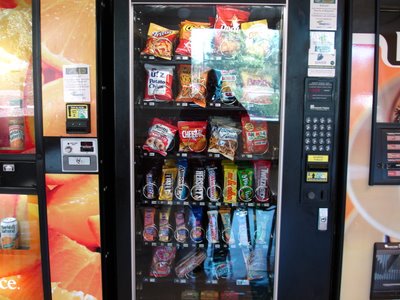 I'm fighting the junk food habit and I want to win.

This evening is cool and feeling wonderful after storms that rolled through last night. I captured some nature during sunset. 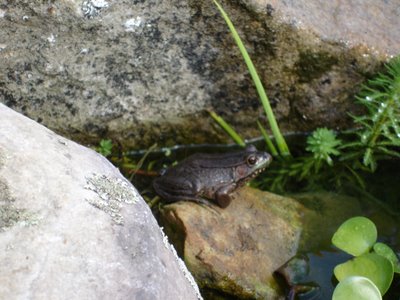 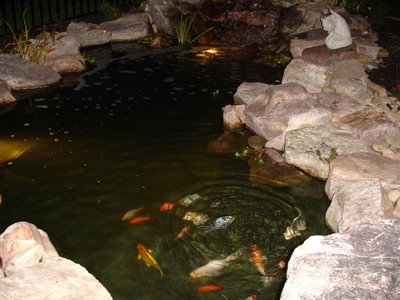 Hey Girlfriend! Don't Iccckkkk Nascar! I was in Charlotte a few short years ago for the race there! What a track! Been to Richmond, Dover, Las Vegas, Charlotte and Pocono's!!! Icckkkk golf but never Nascar! LOLOL Later.... Leave that loose change at home. That's the best way to overcome the junk food addiction from vending machines. Carry nothing smaller than a $20 and you got it beat!
Jane

Mary! What's your secret with Blogger? Did that lovely post take four hours to get up? I can't get through and it's driving me NUTZ!!

I shouldn't knock NASCAR since I've never been to a race but I can not STAND listening to it on TV...

This post took longer than it should have taken. No problem with the pics, but the typing was sluggish, displaying about five words behind my strokes. I dunno...
Hang in there.